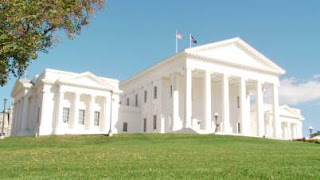 This blog and any number of media outlets have looked at the Virginia GOP's plan to radically change how Virginia's 13 electoral votes are allocated with a goal of allowing a GOP candidate such as Mitt Romney who failed to win the statewide vote to still "carry Virginia" and receive the vast majority of the electoral vote allocation.  Today, a Virginia Senate panel killed the GOP coup d'etat effort and proved that there are still a few decent, honorable GOP elected officials in the Virginia General Assembly, albeit their numbers have been decimated in recent years.  While the coup attempt has apparently been averted in Virginia for this year, the GOP is pushing similar efforts in other swing states.   The Virginian Pilot has coverage.  Here are highlights (note how the bill's sponsor wanted to allow his few Neanderthal rural voters to be able to override the votes of countless more voters in urban areas):

[L]egislation to change how Virginia distributes its 13 electoral votes in presidential elections was defeated in a Senate committee Tuesday, despite its sponsor’s effort to make it more palatable.


The initial proposal from Sen. Charles W. “Bill” Carrico would have moved the commonwealth away from its current winner-take-all system of awarding electoral votes based on the overall popular vote.


His SB 723 called for Virginia to instead proportionately designate electoral votes by vote total in the state’s 11 congressional districts, with the last two electoral votes going to the candidate who carried the most districts.

Had that system been in place last year, President Barack Obama would have received four electoral votes, and Republican nominee Mitt Romney would have earned nine, even though Obama won the state by almost 150,000 votes.

Speaking about the bill, Carrico said he filed it on behalf of his rural Southwest Virginia constituents who feel slighted in presidential elections because their votes are outnumbered by big city dwellers and they get overlooked by candidates.  He insisted it is not an attempt “to gerrymander an election,” as some critics insinuated.

Aware his bill was in jeopardy, Carrico offered a revision to the Senate Privileges and Elections Committee that would have proportionately divided electoral votes based on candidates’ popular vote share.

The amended version was still defeated on a bi-partisan vote of 11-4, with Sen. Jeff McWaters of Virginia Beach among the Republicans who voted to table the bill.

Also opposing the bill was Sen. Ralph Smith, R-Bedford County.  While Smith sees a proportional electoral vote system as more equitable, he’s reluctant to make that kind of change in Virginia when most other states remain winner-take-all.

I have no love for Senator Jeff McWaters who has shown himself repeatedly to be an anti-gay bigot towing the Christofascist line of The Family Foundation, but at least he found the spine to refuse the directive to steal presidential elections.