Obama Realigns As the GOP Declines 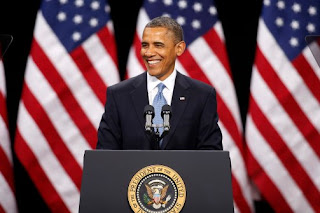 So far the calculus of supposed GOP grand strategists and potentates such as Karl Rove - who lost millions of conservative dollars this last election cycle for near zero results - just does not seem to be working.   Indeed, as a piece in The Daily Beast suggests, the grand realignment that Rove used to blather about appears to be happening in a 180 degree opposite to what Rove pontificated about back during the day of Chimperator George Bush.  All of which is a good thing if one opposes the GOP agenda of greed, religious extremism and white supremacy.  Here are some excerpts from the column:

It’s a word seldom heard since Karl Rove brandished it after the 2004 election. On the basis of an Electoral College win secured by the precarious margin of one state, an Ohio rife with voter suppression, “Bush’s brain”—is that a compliment to Rove?—proclaimed an era of Republican realignment. It was short-lived, rebuked in 2006 when Democrats recaptured the House and the Senate—and refuted in 2008, when Barack Obama swept to a commanding victory across an expanded range of battleground states. After a last gasp in the 2010 midterms, in a time of acute economic distress, Rove’s fantasy was demolished in 2012, when the GOP waged a backward-looking campaign directed to the American electorate of a decade and more ago—two white, too old, too rural, too Southern.

Instead, the crabbed, plutocratic, intolerant Republican appeal did succeed—in mobilizing the new America, which convincingly voted for a second Obama term. But something more has happened here than the reelection of one president, as consequential as that is. We are witnessing a Rove in reverse—but this time, an authentic and accelerating realignment in the demography, ideology, and political identity of the American mainstream. And while Obama both reflects and reinforces the impetus to realign, the befuddled, hemmed-in GOP seems doomed to decline.


Congressional Republicans backed off the fiscal cliff, surrendered the Bush tax cuts for the wealthy, and raised the debt ceiling rather than crashing financial markets and the full faith and credit of the United States. Paul Ryan has now conceded that the GOP won’t shut down the government to extort their preferred cuts in Social Security and Medicare—which they’re still trying to voucherize.


Not since 1936, when FDR called for activist government to redress the shame of “one third of a nation ill-housed, ill-clad, ill-nourished,” has a second inaugural elicited such partisan vitriol. Across the board, Republicans squealed like stuck elephants.

FDR also spoke then of “a sudden changed civilization.” And in the days before and after Obama invoked “new realities” that demand “collective action,” a cascade of polling has reaffirmed that on issue after issue, mainstream America is with the president. On fundamental questions like the role of government, 61 percent of Americans favor “federal” action to deal with income inequality. In an AP-GfK survey, 80 percent agree that climate change will be “a serious problem ... if nothing is done.”
On social issues, where Republicans are imprisoned in the dogmas of the religious right, the degree of change is profound. Here is a headline from the latest Wall Street Journal/NBC News poll: “Majority for the First Time ... Wants Abortion to Be Legal in All or Most Cases.” According to Gallup, 53 percent support same-sex marriage—and another survey reports a double-digit margin for marriage equality. Americans have joined in the journey from “Seneca Falls to Selma to Stonewall.”

Similarly, the anti-immigrant Tea types and the gun lobby, the masters of the GOP, are a dwindling minority of America. A Fox News survey, skewed conservative in most of its results, found that 66 percent of people favor “allow[ing] illegal immigrants to remain in the country and eventually qualify for U.S. citizenship.” And Gallup records 91 percent support for universal background checks for gun buyers—and 60 percent for a ban on assault weapons.
Like Jindal, Republican leaders generally have talked about renewal, but walked away from making real and realistic changes. The party’s challenge is not its branding, but its products. You can only traffic so long in an anodyne phrase like “entitlement reform” before Americans figure out that you’re intent on shredding Medicare, Social Security, and education.

The last, best, and perhaps impossible alternative is for Republicans to heed the counsel of Abraham Lincoln, the first Republican president: “As our situation is new, we must think anew, and act anew. We must disenthrall ourselves.”

Rove has just tried to rationalize the GOP’s plight, and discount the Obama realignment, in a Wall Street Journal column that is a collection of statistics without a coherent or relevant argument. He serves up the Kool-Aid of elections past without accounting for the crucial differences in today’s electorate. He cheers that Obama received fewer votes in 2012 than in 2008. What does that prove about a president who overcame the economic headwinds Rove was certain to the last nanosecond would defeat him, as Bush’s brain resisted Fox News’s decision to call Ohio for Obama? Rove allows that the Republicans “have a perception problem” with Hispanics. If they don’t understand that their problem is more than that, look for 16 years of Barack—and say, then Hillary or Joe—in the Oval Office.

I frankly do not see the GOP changing - at least not before several more rounds of sweeping electoral defeats.  In the meanwhile, expect obstructionism and hysterical efforts to hold back progress and modernity.  Especially by the Christofascist elements of the GOP.
Posted by Michael-in-Norfolk at Friday, February 01, 2013