The Anti-Gay Lies and Palpable Hatred of the "Godly Christians" 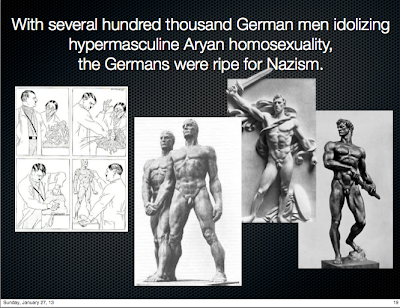 In its early days Christianity was known by among other things its expectation that Christians demonstrate their faith by the manner in which they displayed love of others.  Fast forward two millennium and now the most self-righteous and self congratulatory elements of the Christofascists are best known for their hatred of others.  And they hate just about everyone who doesn't look and think just like them.  Gays, of course, hold a special place in the Christofascist universe of hate and it seems that virtually no lie is too big or too outrageous to be hurled at LGBT individuals in the Christofascist quest to depict us as less than human and to be some sort of disease plagued vermin.  How else to explain the bayshitery being disseminated in at least one church in South Carolina.  Among other things, Pastor Will Coats at Newberry Christian Ministries is repeating the thoroughly discredited lies of Scott Lively that seek to blame Hitler's Nazi regime and the Holocaust on gays.  And he really, really wants to make us appear disease ridden and dangerous.  Patheos Blog looks at the disgusting anti-gay display.  Here are excerpts as well as a few images from Pastor Coats' power point presentation:

Sure, pastors give anti-gay sermons all the time, but rarely do they have powerpoint presentations to go along with them. And even more rarely do they get uploaded online for the world to see… 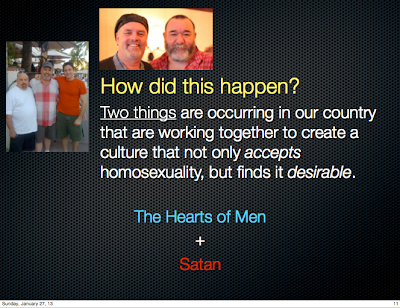 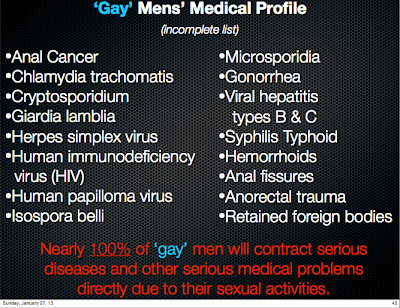 This is the sort of thing Christian pastors are saying to their congregations.  These are the stereotypes and outright lies they’re spreading — with little to no objection from the people sitting in the pews.


This is why gay people (and their allies) have to fight so hard to obtain the same rights straight people have.

Being gay isn’t a disorder. It isn’t the result of some “grand scheme.” It doesn’t make you an inferior person. But these are the ideas that permeate religious mentalities, especially Christian ones.

Let's be clear.  People like Pastor Coats are NOT nice people.  This foul crap goes far, far beyond merely stating ones religious beliefs.  It is aimed at harming LGBT people and fanning the flames of hate and animus.  It is far past time when Coats and churches like Newberry Christian Ministries cease being given any deference or respect whatsoever.   Their values are really little different from those of the KKK and white supremacist groups.  They need to be treated in the same manner by the larger society.  The younger generations seem to understand this and are leaving religion.  It is time that decent honorable older individuals walk away as well.