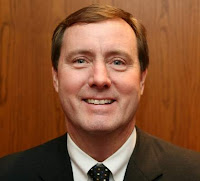 While details remain murky, Nebraska Lieutenant Governor Rick Sheehy (pictured at left) abruptly his post today.  Indications are that Sheehy may have been having affairs.  His wife had filed for divorce in July, 2012stating that her marriage of 28 years was “irretrievably broken.”  A piece in the World Herald indicates that Sheehy had used his state issued cell phone during the past four years to make about 2,000 late-night telephone calls to women other than his wife.  Once again, one has to wonder why 8 times out of 10 that its the "family values" Republicans that have such a hard time avoiding adultery or seeking man on man restroom trysts like former Senator Larry "Wide Stance " Craig?  The supposedly godless Democrats seem to have nowhere near the difficulty keeping the their marital vows and their zippers up.  Here are article highlights:

LINCOLN — Lt. Gov. Rick Sheehy resigned his post abruptly Saturday after questions were raised by The World-Herald about improper cell phone calls to four women, other than his wife, during the past four years.

An investigation by The World-Herald discovered that Sheehy made about 2,000 late-night telephone calls to the women on his state-issued cell phone, many of them long conversations held in the wee hours of the night.

"I've got a knot in my stomach. I'm deeply disappointed. He's done a lot of good things for the state, but that trust was broken, and he's resigned," Heineman said.

Until now, Sheehy, 53, has been considered the leading candidate to succeed Heineman in 2015.

The governor, asked about Sheehy's candidacy, said: "I doubt he will continue his campaign for governor, and no, I would not support him under the circumstances."

Heineman declined to discuss the details of why Sheehy was stepping down, other than to say it involved "personal decisions" made by his lieutenant governor.

I feel sorry for Sheehy's wife and his children who will now have to face humiliation and public scrutiny.
Posted by Michael-in-Norfolk at Saturday, February 02, 2013