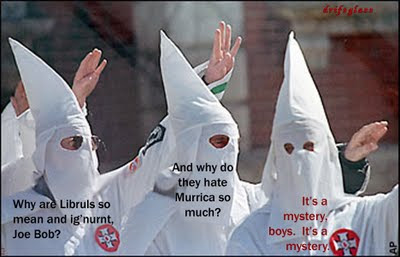 Long over a decade ago when I resigned from the City Committee for the Republican Party of Virginia Beach, I stated in my resignation letter that I could no longer remain a member of a party that sought to subvert the principle of separation of church and state.  I was also troubled by the increasing extremism and attendant hate that was sweeping over the GOP both in Virginia and nationally as the Christofascists were consolidating their hold over the party.  What's frightening is the fact that the GOP back when I resigned looked almost liberal compared to the GOP as it exists today.  But people of good conscience are thankfully still reaching a breaking point where they simply no longer want to be a part of the hate, racism and religious extremism that now are the principal characteristics of the Republican Party.  As Joe Jervis reports, a member of the far right blog Free Republic recently resigned and laid out their reasons for doing so.  The resignation statement made me think back to my exit from the GOP.  Here are highlights:

While I've been a FReeper for well over a decade, I must declare that it is time to part ways. While I have the greatest respect for a great many of you, the days where I can in good conscience remain silent about the issues that set me apart from the rest of FReeperdom have past. For clarity, or perhaps catharsis, I'm not entirely certain which, I'll lay them out on the table an call the ZOT™ down upon myself.

The racism: I just can't handle it anymore. FR has become increasingly racist since President Obama took office, and enforcement has dropped. Now, not a single crime can be reported with an "amish" comment, and I've yet to see a post express embarrassment or shame when lo and behold sometimes the perpetrators turned out to be lily white.

Homosexuality: FR is on the wrong side of history on this one, and I'll just leave it at that. Mostly though, it's the hate. More and more posts reference violent solutions to political disagreements. Some subtly couched, others make no pretense. I wouldn't be surprised at all if I read in the morning paper that a FReeper murdered a federal bureaucrat or a federal judge.

The "ZOT" he refers to is the Free Republic term for permanent banishment when participants say anything outside of Tea Party dogma.


The problem, of course, is that as more and more sane and decent people flee the GOP and its cheer leading organizations such as Free Republic, the stronger the hold of the white supremacists and Christofacists over the party becomes.  As I've said before, it is like a metastasizing cancer.  Only death may ultimately cure the GOP.