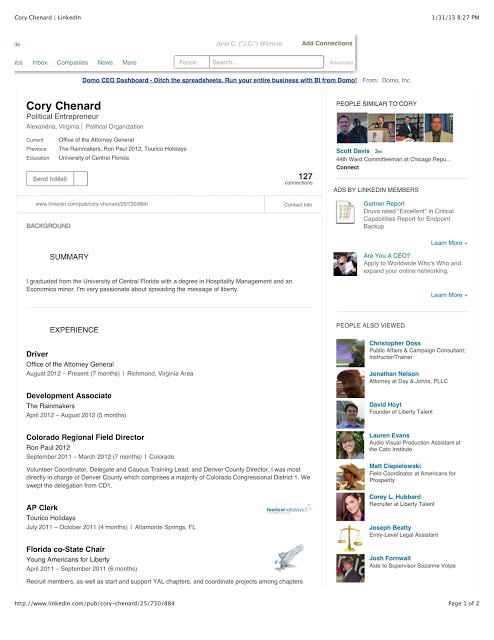 In his soon to be released book, uncrowned GOP gubernatorial candidate Ken "Kookinelli" Cuccinelli reiterates the mindset of Mitt Romney which views 47% of citizens as mooching leaches and echos failed VP candidate Paul Ryan remarks about "takers."  But if there's anyone who is a taker, it is Cuccinelli himself who has refused to resign from his position as Attorney General even as he campaigns full time.   He wants every Virginian to help pay for his campaign by paying his a salary for a job his isn't doing.  He wants us to support all those children he's fathered trying to convince himself of his heterosexuality.  But now we find out that it isn't just Kookinelli himself that taxpayers are being forced to pay while performing campaign activities.  Even his campaign driver is on the Commonwealth's payroll as revealed by The Richmonder.  Kookinelli is both a hypocrite and a "taker" of the first order.  It is long past time that he and all of his campaign workers of the state payroll resign.  Here are highlights from The Richmonder:

The RTD helpfully provides the young man's name--Cory Chenard--but no other details. Thankfully there is this thing called Google, and when I googled "Cory Chenard," Google took me straight to Mr. Chenard's Linked In profile. It's an interesting profile for a driver, so much so I've saved a copy of it and I'm placing the images in this blog post  [see image above].

Here's some things that leap out at me:

1. Mr. Chenard describes himself as a "Political Entrepreneur," not as a driver or chauffeur.

2. He lists a wide variety of political job experiences, but no driving experience.

3. He does not list driving or having a chauffeur's license--maybe he has one, but he doesn't list one.

If you ask me, this is the profile of a political campaign worker serving as the candidate's "body guy," a kind of on-the-road assistant. Ken Cuccinelli's day job (which he shamelessly neglects in order to campaign) is being the Attorney General of Virginia. Is there anything in Mr. Chenard's profile that suggests he is competent to offer Cuccinelli advice on complex legal matters? No, there isn't, so what kind of advice and assistance does it appear that Mr. Chenard is there to provide?

He looks to me like an experienced and pretty well-qualified campaign worker, which begs the central question of this post: why is the State of Virginia paying one of Ken Cuccinelli's campaign workers a salary and benefits?

Some may ask why Cuccinelli needs a driver to chauffeur him around; allow me to clue those of you who have never worked on a campaign in. Cuccinelli needs a driver so he can convert drive time into "call time," time set aside to call and solicit potential donors. Cuccinelli is almost certainly using a state employee to transport himself to campaign events and to help with political fundraising, all on the taxpayer's dime.

Is it any wonder that some people are calling him "Moochinelli"?


It is also telling that Kookinelli - or Moochinelli - co-wrote his soon to be released book with another individual on the state payroll:


Yes, Kookinelli knows all about moochers and leaches.  He's blazing a new trail in ways to f*ck over Virginia taxpayers.  He must think the rest of us are ignorant cretins as he laughs driving down the highway campaigning on the taxpayers' dime.  He needs to be brought up on ethics charges.

Posted by Michael-in-Norfolk at Friday, February 01, 2013