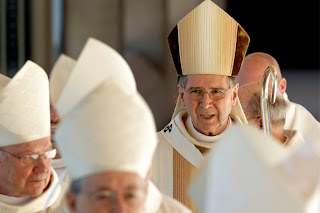 Apparently, the increasing amount of dirt coming to light in the Catholic Archdiocese of Los Angeles has finally hit the tipping point where even the child rapist protectors at the Vatican believed that some sort of symbolic gesture had to be taken against Cardinal Roger Mahony who has been shown to have deliberately protected molesters and kept information from authorities.  And the volume of dirty is only likely to get worse as more files are released under court order.  While I welcome any kind of action that will humiliate the pompous and arrogant Mahony, the sad reality is that what he did is likely the norm across diocese after diocese around the world.  Protecting children simply did not matter to these horrible men who prance around in dress demanding deference from the gullible.  A piece in the Virginian Pilot looks at this latest development out of Los Angeles.  I don't for a moment believe Archbishop Gomez's feigned disgust - he's only upset the world is seeing the extent of the hierarchy's moral bankruptcy.  Moreover, it is telling that Mahony has not losthis title as cardinal.  Here are story excerpts:

Cardinal Roger Mahony, who retired with a tainted career after dodging criminal charges over how he handled pedophile priests, was stripped of duties by his successor as a judge ordered confidential church personnel files released.

The unprecedented move by Archbishop Jose Gomez came less than two weeks after other long-secret priest personnel records showed how Mahony worked with top aides to protect the Roman Catholic church from the engulfing scandal.

One of those aides, Monsignor Thomas Curry stepped down Thursday as auxiliary bishop in the Los Angeles archdiocese's Santa Barbara region. Gomez said Mahony, 76, would no longer have administrative or public duties in the diocese.

"I find these files to be brutal and painful reading," Gomez said in a statement, referring to 12,000 pages of files posted online by the church Thursday night just hours after a judge's order. "The behavior described in these files is terribly sad and evil. There is no excuse, no explaining away what happened to these children."

The fallout was highly unusual and marks a dramatic shift from the days when members of the church hierarchy emerged largely unscathed despite the roles they played in covering up clergy sex abuse.

"It's quite extraordinary. I don't think anything like this has happened before," Reese said. "It's showing that there are consequences now to mismanaging the sex abuse crisis."

Several of the documents released late Thursday echo recurring themes that emerged over the past decade in dioceses nationwide, where church leaders moved problem priests between parishes and didn't call the police.

In one instance, a draft of a plan with Mahony's name on it calls for sending a molester priest to his native Spain for a minimum of seven years, paying him $400 a month and offering health insurance. In return, the cardinal would agree to write the Vatican and ask them to cancel his excommunication.
It was unclear whether the proposed agreement was enacted with the Rev. Jose Ugarte, who had been reported to the archdiocese 20 years earlier by a physician for drugging and raping a boy in a hotel in Ensenada, his file shows.   "He has been sexually involved with three young men in addition to the original allegations," Curry, then Mahony's point person for dealing with suspected priests, wrote in 1993.

In another case, Mahony resisted turning over a list of altar boys to police who were investigating claims against a visiting Mexican priest who was later determined to have molested 26 boys during a 10-month stint in Los Angeles

Prosecutors, who have been stymied for years in their attempts to see the internal church files, have said they will search for new evidence of criminal wrongdoing by church leaders. Most of the material, however, now falls well outside the statute of limitations.

Some church critics said Gomez's actions, particularly against Mahony, amounted to a slap on the wrist as long as he remained a cardinal and a member of the powerful Vatican body that elects the Pope.

The reprimand is a "purely symbolic punishment that they hope will satisfy at least some people in the archdiocese," said Terry McKiernan, founder of BishopAccountability.org, which tracks the release of priest files nationally. "I don't think that many savvy observers of this will be deceived."

Oh, and do check out the letters found here which show that the current Pope was involved in the protection of predator priests as well.  The Church hierarchy continues to be an utter cesspool that ought to shock the conscience of decent moral people.  It deserves no repect and certainly no deference by politicans or anyone else.

Posted by Michael-in-Norfolk at Friday, February 01, 2013