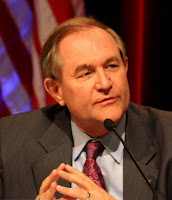 I've known Jim Gilmore (pictured at right) since 1974 when we were law school classmates at the University of Virginia.  Indeed, while he was governor, he appointed me to a state authority responsible for financing for Virginia's colleges and universities.  No one would ever describe Jim Gilmore as a liberal by any stretch of the imagination.  Nonetheless, he sees the Republican Party's perilous mark towards a permanent minority party if moderation is not restored.  A piece in National Review looks at Gilmore's call to the GOP to cease its extremism and to let go of the hate and bigotry that is driving voters away from the GOP.  Here are some article excerpts:

Jim Gilmore, a former chairman of the Republican National Committee, says the GOP is quickly becoming a “permanent minority.”

“I don’t think the party dies immediately,” Gilmore says. “It’s not going to just disappear like the Whigs did, since there is so much law that supports the two-party system. But Republicans will be locked into a permanent minority at the national level unless we seriously rethink our approach.”

Gilmore, a former Virginia governor, spoke with National Review Online on Wednesday. He says he and other longtime Republican leaders have been privately fretting about the GOP’s future since Mitt Romney’s defeat.

“The world has changed beneath us,” Gilmore says. “Shrillness and extreme language are driving away the voters who could help us build a majority. We’re not speaking to them as reasonable conservatives. Republicans have to decide if they want to govern or play ideological parlor games.”

“Young people today have a more tolerant, hands-off perspective,” he says. “Their libertarian philosophy, for example, has to be taken into consideration. Yet we keep projecting anger at the gay community and the Hispanic community, even though they’re open to many of our ideas.”
“It’s a real political problem when Hispanics don’t believe that the Republican party is their friend,” he warns. “You’ve got to fix that.”

I believe that Gilmore is 100% on point.  Sadly, the Christofascists and Tea Party elements of the GOP base refuse to hear the message that Gilmore and others are trying to send to them.
Posted by Michael-in-Norfolk at Wednesday, January 30, 2013