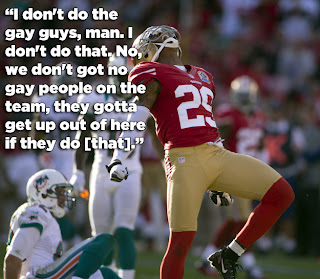 I'll be upfront on my view of most aspects of pro-sports, but in particular pro-football.  I see pro-football is little more than a modern day version of gladiator contests where most of the players are brutish, mindless idiots who are grossly over paid.   The Clydesdales at Busch Gardens in nearby Williamsburg seemingly out shine many NFL players in the intelligence department.  Underscoring this reality, in the lead up to this weekend's Super Bowl game, Chris Culliver, a seemingly stereotypical dimwitted San Francisco 49er's player has ignited a fire storm with homophobic remarks about gays and gays in the NFL.  Michelangelo Signorile makes the case as to why the NFL/49er's should suspend Culliver and not allow him to play in Sunday's game.  Here are excerpts:

San Francisco 49er Chris Culliver selfishly shot off his mouth yesterday, igniting a firestorm of controversy and creating a nightmare for his team and the National Football League as they head to the Super Bowl. For that alone the NFL should suspend him, his comments having put his entire team at the center of an unnecessary controversy as they're trying to focus on the game.

But for the horrendously bigoted, anti-gay content of his remarks, there is no question that Culliver must be suspended if the NFL is serious about its claims to be taking on homophobia in its ranks. Thanks to players like Minnesota Vikings punter Chris Kluwe and Baltimore Ravens linebacker Brendan Ayanbadejo and their pro-gay advocacy, we're seeing a shift among NFL players, but the leadership needs to take strong stand against Culliver's kind of bigotry if that shift is to continue.

"I don't do the gay guys, man," Culliver told radio host Artie Lange. "I don't do that. No."  Asked whether there are any gay players on the 49ers, Culliver said, "Nah. We don't got no gay people on the team. You know, they gotta get up out of here if they do. Can't be with that sweet stuff."

Incredulous, Lange pointed out that gay players might be able to play well, too, but Culliver responded, "Nah. Nah. Can't be... can't... uh... be in the locker room."

Lange then asked whether Culliver thought gay players should stay closeted while playing professionally, and Culliver responded, "Yeah, you gotta, you gotta come out 10 years later after that."

The NFL and many of its officials, as well as many team owners, managers and coaches, have gone to great lengths in condemning homophobia and saying that it would be fine for a player to come out as gay and that he'd be accepted and welcome. But statements like Culliver's, if they go unpunished, make all of that look like window dressing, and no player is going to even think about coming out.

The San Francisco 49ers issued a statement condemning Culliver's remarks and saying that they have "addressed the matter with Chris" and that they "proudly support the LGBT community." But again, without any repercussions, it's all just words. Culliver himself issued a ridiculously weak apology that he didn't even seem to write himself: "The derogatory comments I made yesterday were a reflection of thoughts in my head, but they are not how I feel," he said. "Those discriminating feelings are truly not in my heart."  Really?

[T]he 49ers suspended running back Brandon Jacobs just last month for making derogatory comments about his bosses. Are the team management saying that they take it seriously when they themselves are insulted, but not when closeted gay players and gay fans are subjected to bigoted, offensive remarks?

If there is no suspension, the message from the NFL to young people, amid continued reports of suicides by LGBT youth who experienced bullying, is that it's OK for sports players and everyone else to attack gays and demand that they stay closeted and live in shame. If Culliver faces no repercussions, then the NFL's words about support and acceptance of gay athletes and fans are completely empty.

For players, FANS, anyone...who the hell cares about anything N.F.L.??? And if you do, why the f do you? Are you stupid? Bored? Idiotic? Please tell me.

It angers me even more that any a$$hole like Culliver could even be mentioned. He's a stupid hunk of flesh. "ME HIT. ME THRASH." That's all he knows. So who cares what this f^ck says and why should we?

I know why...it's the No F'king Life and far too many Americans WORSHIP at the altar of the NFL. So sad.

One of my finer rants and I forgot to sign it!!!