The Hagel Witch Hunt - The GOP Has Learned Nothing 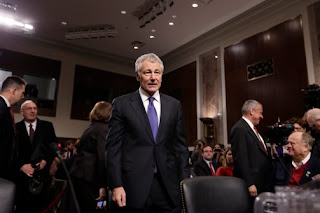 This blog has published a number of posts taking to task politicians who claim that they "support the troops" while on the campaign circuit yet who betray the troops and throw away American lives - and also bankrupt the country - as they seek to go off on one foreign war fool's errand after another.  The totally unnecessary Iraq War and the continuing fiasco in Afghanistan are two prime example.  And in questioning today directed at Defense Secretary nominee Chuck Hagel, the biggest GOP objection to Hagel seemingly is that he (i) calls the Iraq War for the needless disaster that it was and (ii) isn't sufficiently reckless and willing to take the nation into un-winnable wars.    Indeed, one would think the GOP's only concern is to maximize profits to defense contractors.  The lives of American troops?  They simply are not an issue to these members of the GOP.  Perhaps because so many of these assholes don't even have family members in the military in harm's way.   The Daily Beast looks at the GOP effort to crucify Hagel because his isn't enough of a war monger.  Here are highlights:

The contentious Senate hearing for Secretary of Defense nominee Chuck Hagel divided starkly along partisan lines, with Republicans attacking their former colleague with the pitchfork zeal of heretic hunters.

Hagel’s calm recitation of consensus catechism on issues ranging from Iran to Israel to nuclear weapons didn’t seem to make any impression on his conservative critics.


This was personal. John McCain repeatedly interrupted his “old friend” and fellow Vietnam Vet with palpable anger, his fury directed at Hagel’s opposition to the Iraq War and the 2007 troop surge. The core offense appeared to be Hagel’s contention that the invasion of Iraq was the worst foreign policy “disaster” since Vietnam – a parallel that infuriates McCain.

Oklahoma Senator Jim Inhofe, a Republican, reinforced his reputation as possibly the worst U.S. Senator with bear-baiting questions like this: “Why do you think that the Iranian foreign ministry so strongly supports your nomination for Secretary of Defense?”

Alabama Senator Jeff Sessions doggedly focused on a report by the anti-nuke group Global Zero, which advocates the elimination of nuclear weapons. The report was co-authored by Hagel, four generals and a number of ambassadors. The organization itself has hundreds of international leaders who have signed on to its recommendations, including Reagan’s Secretary of Defense Frank Carlucci, Carter National Security Advisor Zbignew Brezinksi, 9/11 Commission Co-Chair Lee Hamilton and General Anthony Zinni. Sessions and other Republican senators kept cherry-picking phrases from the report and ignoring substantive subtlety, despite Hagel’s repeated assurance and demonstrated record in opposing unilateral disarmament and support for modernizing the U.S. nuclear program. This clarification by the authors might help calm any genuine concerns, if they exist.

It made me wonder what Sessions would have said to Ronald Reagan, who advocated for nuclear disarmament more than 150 times, according to his aide Martin Anderson, in statements like this: “I believe we’ve come to the point that we must go at the matter of realistically reducing… if not totally eliminating, nuclear weapons—the threat to the world.”


A Democratic President nominating a Republican to his cabinet is usually seen as bipartisan outreach. But not this time. The reason, I think, is threefold.

First, it reflects the polarization afflicting the Republican party and its intolerance of dissent. Hagel is a small-government conservative but a committed internationalist who is wary of unilateral American over-extension, views that extend from his experience as a twice-wounded enlisted infantryman in Vietnam.

Second, it reflects the tortured legacy of the Iraq War and the contradictions it creates for conservatives who feel compelled to defend that war of choice, predicated on flawed intelligence presented to the American people. Hagel earned the enduring anger of the neo-conservative crowd by openly criticizing the Bush administration for its prosecution of the Iraq war and subsequently opposing the Surge. Defenders of the Bush administration now often try to delink the decision to invade from the decision to double down with the surge as a way of reclaiming the high ground. It is now clear that Hagel was right at least on this count: the invasion of Iraq was an ideologically driven overreach that proved a costly distraction from Afghanistan in terms of both blood and treasure while further destabilizing the region. History, as Hagel noted, will be the ultimate judge.

Third, it reflects the deep animus that still exists for President Obama on the part of some conservatives–so much so that any Republican who consents to serve with him is seen as a traitor to the tribe, a dynamic also seen in the GOP’s primary rejection of Utah governor and former Obama China Ambassador Jon Huntsman, despite being arguably the most fiscally conservative candidate in the 2012 pack. By consenting to serve with President Obama–and therefore creating bipartisan cover for the Democrat’s defense strategy–Hagel has committed an unpardonable sin.

My view?  The next time you encounter a GOP elected official bloviating about "supporting the troops," call them out.  I certainly plan on doing so. They are lying assholes.