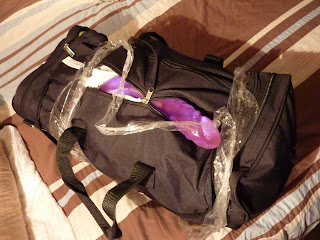 Over a year ago I wrote here about the travesty done to a young professional gay couple from Norfolk by employees of United/Continental Airlines at George Bush Intercontinental Airport in Houston, Texas.  In response to demand letters, the leadership of the airline basically "flipped the bird" to these innocent victims and victimized them yet again - even though United/Continental Airlines claims to be LGBT friendly through their involvement with the National Gay and Lesbian Chamber of Commerce (at all times relevant to this story, the couple have themselves been members of the NGLCC).  As the saying goes, actions speak louder than words.  And Continental's actions have spoken volumes.  The tape on the bag pictured above clearly reads "Continental Airlines" and tellingly, the zipper on the bag was undamaged, so that there was no legitimate basis for taping up the bag while unzipped.

The actions against this couple by United/Continental employees were both shocking and done with malice.  Dissatisfied with Continental's insulting response, the couple have filed a lawsuit in Harris County, Texas District Court.  The lawsuit is styled Bridgeman, et al v. United Continental Holdings, Inc. and Continental Airlines, Inc., and was filed on Friday, August 24, 2012.  As yet, no case number has been assigned to the case.  The theories for recovery against United/Continental include intentional infliction of emotional distress, invasion of privacy, and negligence.  Both compensatory damages and exemplary damages are being sought.

Here are the facts as laid out in the lawsuit:

On May 21, 2011, Plaintiff's a homosexual couple, were returning from vacation on a flight provided by Defendants United Continental Holdings, Inc., and Continental Airlines, Inc. (collectively referred to as "Continental") from Costa Rica to Norfolk, Virginia with a layover at George Bush Intercontinental Airport in Houston, Texas.  When Plaintiffs arrived at Houston, they retrieved their checked luggage, which was undisturbed at that time.  After going through Customs, Plaintiffs rechecked their bags, and proceeded to board their flight to Norfolk.  Upon arriving in Norfolk, Plaintiffs exited the aircraft and went to the baggage claim area.  Plaintiffs' bags were sent to the baggage carousel where Plaintiffs discovered to their horror, that a private sex toy had been removed from one of their bags, covered with a greasy foul-smelling substance, and taped prominently to the top of their bag.

Plaintiffs experienced extreme shock and horror when they observed the above described bag and when observing the surprised and/or laughing faces of numerous onlookers in the baggage claim area.  Plaintiffs were experiencing such a high degree of shock and embarrassment that they felt compelled to call two friends to come to the airport to assist them. Fortunately, the friends arrived and were able to assist Plaintiffs out of the airport and to their home, but by that time the damage had already been done, and Plaintiffs had suffered severe emotional trauma.

.   .   .   It was one or more of Defendants' employees that searched through Plaintiffs' private items contained in their bag with no feasible basis, removed the sex toy, defiled the sex toy, and taped it on display with the intent to inflict extreme emotional distress and mental anguish upon Plaintiffs.  Because of the fact that the sex toy was contained in the bag of a male, and because the employee(s) responsible knew that the bag belonged to a male due to the name tag attached to the bag and the male clothing contained in the bag, there is a high likelihood that these egregious actions were directed towards Plaintiffs because they are homosexual and because they are males.

The couple is represented by the law firm of Faubus & Scarborough LLP based in Houston, Texas.

For full disclosure, I know this couple (pictured below) well - they are among my closest friends - and they are not crack pots.  What had been done to their luggage was observed by an entire plane load of people.  It should also be noted that what was done to them could happen to anyone, gay or straight, young or old.   No one should have this type of travesty intentionally done to them. 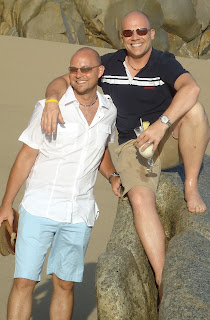