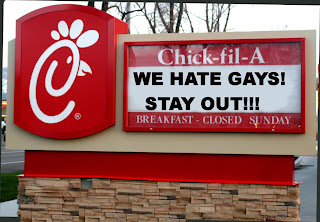 Despite much controversy and out cry from the Ghent neighborhood in Norfolk in particular, the Norfolk City Council voted to sell a parcel of land on Monticello Avenue to Chick Fil-A - that's right the controversial anti-gay company that has funded millions of dollars to hate groups - for $200,000 less than it's current forth and $300,000 less than a local developer had offered.  Frankly, it's all too typical of  homophobic Mayor Paul Fraim and some of his gang that couldn't shoot straight fellow council members.  The LGBT community should take note of where Fraim's loyalties lie.  Here are excerpts from the Virginian Pilot's coverage:

Chick-Fil-A has acquired a 1.2-acre parcel on Monticello Avenue, but the Atlanta-based company still must woo the city's planning officials.

The City Council voted Tuesday to sell the property to Chick-Fil-A. The proposed terms of the land transaction were the source of controversy earlier this year when the council gave city staffers the unofficial go-ahead to sell the property for less than Norfolk purchased it in 2007.

The city purchased the property from the Union Mission Ministries for about $2.1 million. The property, now assessed at $1 million, was sold to Chick-Fil-A for $800,000.

Matthew Stellmaker, a development manager for Chick-Fil-A, said this week that the company is modifying the building based on feedback from the design and planning boards, and expects to present its new plans next month.

City Attorney Bernard Pishko said the sale would be voided if the company does not get city approval for its building design.

What's next?  Will the city cut a deal with a KKK or neo-Nazi backed company?  I for one will never set foot in the facility if it is built and I hope that the design and planning boards put Chick Fil-A through the wringer.
Posted by Michael-in-Norfolk at Wednesday, August 29, 2012