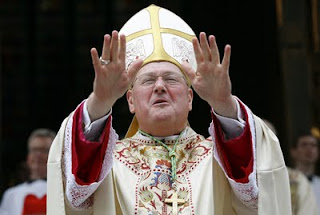 Perhaps realizing that his appearance at the GOP Convention was being seen by many as a blatant political endorsement of Mitt Romney and Paul Ryan - which might get the IRS on the Catholic Church's case - the ever dishonest, anti-gay and porcine Cardinal Timothy Daily has now agreed to give the closing benediction at the Democratic Party convention in Charlotte, North Carolina.  Part of me would have preferred to not see his face in Charlotte at all.  After all, this is the same man that helped protect child rapists and who many believe hid money while heading up the Milwaukee Diocese to avoid making payment to sex abuse victims and who has been an architect of the Catholic bishop's dishonest mantra that the Obama administration is threatening the "religious liberty" of American Catholics.  Frankly, a sleazy whore would make for a more honest speaker.  Dolan is in perfect company in Tampa, but the Democrats should not have sullied their event with this foul pig.   The Catholic News Herald is spreading Dolan's disinformation propaganda.  Here's a sampling:

CHARLOTTE — Cardinal Timothy M. Dolan of New York, the head of the U.S. Conference of Catholic Bishops, has accepted an invitation to deliver the closing prayer at next week's Democratic National Convention, according to a statement from Archdiocese of New York spokesman Joseph Zwilling.

He will give the concluding benediction prayer on Thursday, the final night of the GOP convention, where Mitt Romney is slated to accept the presidential nomination for his party.
It was made clear to the Democratic National Convention organizers, as it was to the Republicans, that the cardinal was coming solely as a pastor, only to pray, not to endorse any party, platform, or candidate.

The cardinal has not endorsed either candidate in the 2012 presidential race.

However, he has been an outspoken critic of a mandate issued by the Obama administration to require employers to offer health insurance plans that covers contraception, sterilization and abortion-inducing drugs, even if doing so violates their consciences.
Numerous dioceses, non-profit organizations and Catholic-owned businesses have sued the Obama administration, arguing that the mandate violates the First Amendment by forcing them to compromise their deeply-held religious convictions.
Obama has also voiced support for abortion and is the first U.S. president to openly advocate a redefinition of marriage to include homosexual couples.

There's nothing non-partisan about Dolan.  My money is on the fact that if he publicly endorses candidates or a particular political party, the Church's tax-exempt status might go bye bye.  Hence his decision to appear at the Democrats' convention.  The man is a snake and most certainly NOT a man of God.
Posted by Michael-in-Norfolk at Tuesday, August 28, 2012

May I humbly remind the good Cardinal Dolan,
as he preens and pontificates under the spotlights
of the political conventions:
there is really room for only ONE superstar in his religion.
As the Cardinal addresses and blesses the Republicans and their billionaire buddies,
as he smiles upon those who would destroy Social Security and voucher Medicare to death,
as he joins with those who readily admit they they “don’t care about the very poor”......
it would be good, it would be very good ...for the dear Cardinal
to remember -and take to heart- the words of his boss,
who once said “What you do for the least of these you do for me”.
Unless perhaps, just perhaps,
the Cardinal is working for someone else these days?
As our Founding Fathers so wisely realized:
Politics, secular power, and Religion do not mix.
They bring out the worst in each other.
And ultimately.....they would destroy each other.