Quote of the Day: Andrew Sullivan on Romney's Speech: 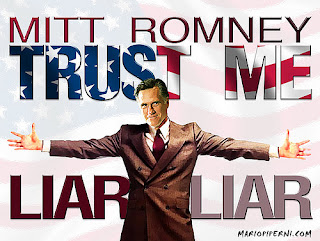 Mitt Romney is proving that he's the perfect ideological fit with Paul Ryan - both are total liars and think the rest of us are fools.  They are the political figure equivalents to faux historian David Barton who rewrites history to have it fit his Christofascist agenda.  It's both mind numbing and frightening that this duo might land in the White House.  They might be better fit to be part of Adolph Hitler's propaganda machine.  They are not more dishonest.  Andrew Sullivan is appalled:

What we have been allowed to see is so spectacularly vacuous, I really don't know what to say. There is also a huge lie to start with:

Four years ago, I know that many Americans felt a fresh excitement about the possibilities of a new president. That president was not the choice of our party but Americans always come together after elections. We are a good and generous people who are united by so much more than divides us.

In the middle of the worst recession since the 1930s, in his first weeks in office, the GOP monolithically voted against his stimulus, including the third of it which was tax cuts. They even opposed tax cuts because Obama proposed them! Mitch McConnell said the following out loud:

"The single most important thing we want to achieve is for President Obama to be a one-term president."

Americans did not come together. One party, Mitt's, set out from the get-go to destroy Obama's presidency, regardless of the impact of the recession, which they helped intensify by slashing public sector jobs across the country and blocking any new stimulus after 2010. Then this lie about the situation in early 2009:

Every small business wanted these to be their best years ever, when they could hire more, do more for those who had stuck with them through the hard times, open a new store or sponsor that Little League team. Every new college graduate thought they'd have a good job by now, a place of their own, and that they could start paying back some of their loans and build for the future. This is when our nation was supposed to start paying down the national debt and rolling back those massive deficits.

Again, this is surreal. As the country was losing jobs at a rate of what can only be called free-fall, did everyone expect a sudden immediate boom, the best years of their lives? Was that the time when we should have suddenly started cutting spending? Romney knows this line of argument is premised on a fantasy. It's as if Romney cannot address the actual reality and propose solutions, but chooses to invent an entire alternative universe in which he can invent dreams no one in February 2009 had, listening to an Inaugural Address that told them that affairs were grim and foreboding and difficult.

Candidly, the tawdriest whore has move integrity than Mitt Romney.  The man's dishonesty is unbelievable and scary!   Let's be clear: I despise the man and think he and his reverse Robin Hood policies that would steal from the working poor and middle class and give to the rich are a danger to the country.
Posted by Michael-in-Norfolk at Thursday, August 30, 2012