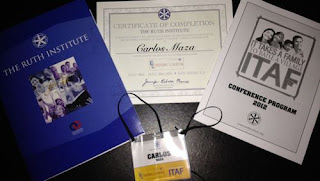 The National Association for Marriage ("NOM") makes a great show of pretending that it's only goal is to "protect the sanctity of marriage" and not to demonize LGBT individuals.  It's actions, of course, tell a different story and a glimpse of the real NOM agenda was captured when a Maine court released numerous documents from litigation involving NOM's flagrant disregard for that state's laws on campaign finance disclosure.  Now, NOM has again been caught with its pants down so to speak.  Carlos Maza, a gay blogger, attended NOM's weekend-long "It Takes A Family To Raise A Village" (ITAF) conference in San Diego, California, and the picture he presents in an exclusive story at Media Matters is pretty ugly.  It's another example of the godly Christian crowd lying through their teeth and deliberately distorting research to further their agenda of hate.  Carlos' story is lengthy, but it is worth the read in my view since it is important to know what one's enemies are up to in order to properly fight back.  Here are some excerpts:

I wasn't expecting much when I applied to ITAF's "Emerging Leaders" program in mid-June. I'd spent most of the month publishing blog post after blog post about ITAF's anti-gay "suggested reading" list, its roster of extreme anti-gay speakers, and its ties to a megachurch linked to the "ex-gay" movement. . . . .
So when I got a "Congratulations" email at the end of July informing me that I'd been accepted into ITAF, I wasn't sure how to react.

So on Thursday, July 26, armed with little more than my camera phone, a notepad, and a hastily-concocted backstory, I boarded a flight to San Diego to attend what would end up being one of the most disturbing and overtly homophobic experiences of my life.

Next up was Dr. Jenet Erickson, an assistant professor at BYU's School of Family Life. Her seminar, titled "Marriage: The Indispensable Social Institution," . . . . She called same-sex relationships "inherently unstable," suggesting that gay partners eventually get bored of each other as a result of having the same gender.

Robert Gagnon, associate professor of the New Testament at Pittsburgh Theological Seminar, gave the final lecture of the night, "Jesus and Marriage." Just a month earlier, I'd published an extensive record of Gagnon's history of anti-gay extremism: linking homosexuality to pedophilia, calling homosexuality an unhealthy and destructive lifestyle, promoting "ex-gay" therapy, and so forth. He'd spoken at every ITAF conference since the program's inception. . . . . For over an hour, Gagnon cited Bible verse after Bible verse explaining how Jesus had never meant for marriage to include same-sex relationships, arguing that homosexual activity is an even greater offense than polygamy in the eyes of God.

At noon, I sat in on a talk titled "The Truth About Same Sex Parenting Studies," led by economist Douglas Allen. I had read Allen's work through the Ruth Institute blog before - including a piece in which he wrote that same-sex relationships were more unstable, unhealthy, and promiscuous than heterosexual relationships. . . .  Allen cited the [Regnerus] paper's claim that children raised by gay parents are more likely to be sexually abused in the home.

During the next session, titled "The Question We Never Thought We'd Ask: Do Kids Need A Mom & A Dad?," BYU's Erickson again relied heavily on the Regnerus study to claim that children raised in same-sex households are more likely to be sexually abused by their parents.

Gagnon's book is a treasure trove of some of the most extreme anti-gay commentary imaginable: gay people have shorter life expectancies, homosexuality can be cured through treatment, homosexuality is an "inexcusable rebellion against God," to name a few. . . . . Homosexuality's alleged health risks, according to Gagnon, are a form of "payback" against gay people for engaging in behavior that they know makes them "worthy of death."

But what I saw at the conference - selling a book that labels gay people as pedophiles worthy of death, distributing Bible quotes to college students similarly calling for gays to be killed, hosting entire speeches devoted to condemning gays and lesbians as deviant sinners - represented a brand of anti-gay extremism that I assumed even NOM would have shied away from.

You get the drift.  And this is what NOM is feeding to youth and many others.  This goes way beyond "protecting marriage."
Posted by Michael-in-Norfolk at Tuesday, August 28, 2012

The sad thing is that these teens and young adults swallow these lies hook line and sinker, only to go out and about and repeat the lies, again and again and again.