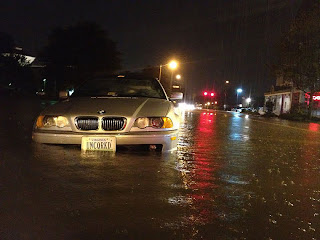 Even though Republicans at both the national and state level here in Virginia pretend that global warming is just a myth, those of us who aren't drinking Kool-Aid and are observing objective facts easily know that something is happening.  And it's not something good for our future and life they way that we know it.  This week Hampton Roads got a good dose of reality check when severe storms with heavy moved through in coordination with a full moon (which increases tide levels) and high tide.  Many of the local cities experienced significant flooding in areas with parts of Norfolk, Newport News, and Hampton perhaps hardest hit.  The image above is from about 6 blocks from my office in the Ghent area of Norfolk. As the Virginian Pilot reports, Norfolk - despite its lack of forward thinking on many fronts - is at at least trying to come up with a plan to contend with the reality of global warming and its consequences.  Here are some article excerpts:

Plentiful rainfall in a short period of time, combined with the 7 p.m. high tide, left standing water throughout the city, according to Alice Kelly, assistant director of public works. .  .  .  .  This has become the weather du jour in Norfolk, and some experts say it is more than a passing trend. Either way, the city is planning for the worst.

Pinpointing what causes flooding in Norfolk is tricky, with factors varying from storm to storm. High tides, the phase of the moon, the gradual sinking of Norfolk, intense storms and sea level rise all contribute. In 2008, the EPA ranked Norfolk second only to New Orleans among East and Gulf Coast cities most threatened by flooding.

The city has proposed large-scale flood-mitigation projects, focusing on areas such as Pretty Lake, the Hague, Ohio Creek and Mason's Creek. The U.S. Senate recently authorized the Army Corps of Engineers to undertake a $100,000 feasibility and environmental impact study of the plans. The work will build on a study that the city has already commissioned.
The city acknowledges it won't be an easy or inexpensive fix. Norfolk can't move any higher above sea level, so it must find a way to keep out water or pump it elsewhere. Preliminary studies indicate that it could cost $58.6 million to build a flood wall and pump station at the Hague and $46.4 million for a similar project at Pretty Lake. A pump station and dredging at Mason's Creek could cost as much as $30 million.

Paige Rose, president of the Ghent Neighborhood League, said she left the City Council meeting Tuesday to find herself in the middle of the storm. Then, she said, she parked four blocks away from her home to protect her vehicle, which meant wading shoeless through 2 feet of water.

While the article focuses on Norfolk, Hampton and Newport News likewise have serious problems.  On my way home from work one of the major through fares I typically drive was under water.  Back in Norfolk, my daughter (who lives in my house there) said that the entire street in front of the house was covered in water although the house was high and dry - and that's in one of the higher parts of the city.  Will the GOP wake up to reality or keep drinking the Kool-Aid?
Posted by Michael-in-Norfolk at Saturday, September 01, 2012