Catholic Priest: It’s The Kids’ Fault They Were Molested 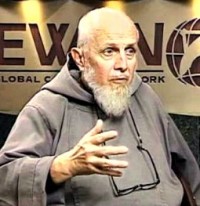 If one wants a glimpse into the utterly f8cked up world  and alternate universe of the Roman Catholic Church hierarchy, one need only the statements of Fr. Benedict Groeschel (pictured above), who in comments during an interview with the National Catholic Register basically blamed children and youths for their own molestation at the hands of Catholic priests.  In Groeschel's bizarre world, the victims seduced their molesters.  It's beyond sick, but in my view is representative of the Church hierarchy's mentally disturbed mindset.  How anyone moral and honorable can still give any deference or respect to these foul individuals is mind boggling.  Box Turtle Bulletin has a good analysis of Groeschel's batshitery.  Here are excerpts:


Fr. Benedict Groeschel, the 79-year-old founder of the Franciscan Friars of the Renewal, is not just a curmudgeonly New Jersey-born and -accented Capuchin monk. He is also a long-time television personality on the Catholic television network EWTN and popular speaker among American Catholicism’s conservative set. But he’s not just a Franciscan priest, he’s also Dr. Benedict Groeschel, having earned a Ph.D in Psychology from Columbia University back in 1971, when homosexuality was still considered a mental illness by the APA.

As one of the Church’s acknowledged “experts” on sexuality, Groeschel was called upon by east coast dioceses, including the Boston Archdiocese, to perform psychological screenings to candidates for the priesthood. He has also been called upon to counsel Catholic priests who were accused of sexual improprieties — including those who had sex with minors – with disasterous results. Nevertheless, he was honored in 2011 by the Catholic Psychotherapy Association’s Lifetime Achievement Award.


I think it’s important to understand all of that before reading what Groeschel told the National Catholic Register this week:


People have this picture in their minds of a person planning to — a psychopath. But that’s not the case. Suppose you have a man having a nervous breakdown, and a youngster comes after him. A lot of the cases, the youngster — 14, 16, 18 — is the seducer.

Moments ago, the Register’s editor placed the following note at the URL where the interview was originally posted:

Child sexual abuse is never excusable. The editors of the National Catholic Register apologize for publishing without clarification or challenge Father Benedict Groeschel’s comments that seem to suggest that the child is somehow responsible for abuse. Nothing could be further from the truth. Our publication of that comment was an editorial mistake, for which we sincerely apologize. Given Father Benedict’s stellar history over many years, we released his interview without our usual screening and oversight. We have removed the story.


The story may have now been removed, but while it was online, it gave a glimpse of the real mindset and unbelievably sick psyche that, in my opinion, predominates the Church hierarchy.

Posted by Michael-in-Norfolk at Thursday, August 30, 2012