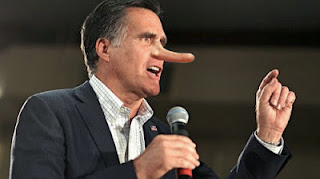 As a former Republican from a family of Republicans (all have pretty much left the GOP at this point) I often bemoan what has happened to the party in which I was a city committee member for 8 years.  One of the worse changes - putting aside the fact that the GOP is now a religious party in most senses - is the utter disregard for the truth that permeates all levels of the party, particularly in the form of the top of the ticket: Mitt Romney and Paul Ryan.  The irony is that both men (and the party as a whole) say they are devoutly religious yet they lie with an impunity that is nothing less than shocking. If nothing else, the hypocrisy of it all is stunning.  They apparently learned much from the Christofascist party base that ignores most of the Gospel message on a daily basis.  At least towards those who are poor, non-white, non-heterosexual, non-Christian and non-native born.  A column in the New York Times looks at the death of truth and honesty in the Republican party.  Here are highlights:

Honesty is a lost art. Facts are for losers. The truth is dead.Pick one. Whatever the term of art, they all signal a dark turn, and, this week, the Republican Party took that turn with reckless abandon.

Lying is certainly nothing new in politics. One could even argue that it’s fundamental to politics. Saying incredible things in a credible way is the art; using math of vapors to sell dreams of smoke is the craft.
But Paul Ryan’s acceptance speech on Wednesday took things up a notch.

“Ryan’s speech was an apparent attempt to set the world record for the greatest number of blatant lies and misrepresentations slipped into a single political speech. On this measure, while it was Romney who ran the Olympics, Ryan earned the gold.”

So much was written about this and other Republican attempts to distort and deny the truth this week. But I’m beginning to worry that many Americans are growing weary of isolating the lies, coming as they did in torrents.

The Romney campaign seems to be banking on this fatigue and counting on The Fourth Estate being reduced to little more than a fifth wheel in the political zeitgeist. One of its pollsters said this week that the campaign would not be dictated by fact-checkers.


Mediaite’s Tommy Christopher looked at the fact-checking site PolitiFact’s tallies on Aug. 10 and found that:

“Mitt Romney’s statements have been judged Mostly False, False or Pants on Fire 46 percent of the time, versus only 29 percent for President Obama. In the Pants on Fire category alone, Romney is more than four times as likely to suffer trouser immolation than the president. Nearly 1 in 10 statements by Romney earned flaming slacks, versus 1 out of every 50 for Obama.”

[T]he extent to which Republicans have embraced ignobility in this campaign is astounding. They have used their convention podium to unleash a whole lot of half-truths, so many that fact-checkers have been working overtime. But trying to chase down every lie is like trying to catch every bug in a log. It’s almost impossible.

Yet the candidates are virtually tied in most polls. What does this portend for the republic? I worry deeply about this, not simply because I work at a newspaper, but because I am an American.

And how can a party that incessantly repeats the mantra that our rights were granted by God repeatedly violate a basic tenet of almost every religion: truth-telling? What does it mean when a party that trafficks in American greatness trades in human horridness?

Romney long ago demonstrated that he was willing to do anything and take any position — even if they contradicted previous ones — to make it to the White House. And while that may be fine for him, it shouldn’t be fine with us.  We deserve better and should demand better.

Posted by Michael-in-Norfolk at Saturday, September 01, 2012