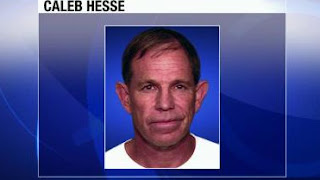 As noted in the prior post, Archbishop Cordileone isn't the only self-righteous, falsely pious hypocrite to experience a take down over the weekend.   Joining the list of those under arrest is California Prop 8 donor and homophobe extraordinaire, Douglas Hesse. Hesse's offense? Molesting numerous boys in true self-loathing homophobe fashion. I frankly have no sympathy whatsoever for either Cordileone or Hesse.  Both have ruined numerous lives, albeit in different manners.  Back2Stonewall has details on Hesse's arrest. Here are some highlights:

A longtime anti-gay activist, California Prop 8 donor,  and  elementary school teacher was taken into custody on August 17th after admitting inappropriate contact with young boys.   Caleb Douglas Hesse, a teacher for the Morongo Unified School District since 1987 .   .   .   .   and a longtime youth volunteer with the virulently homophobic Evangelical Free Church of Yucca Valley, has  confessed to sexually abusing “numerous underage boys,” with authorities believe the crimes occurred between the early 1980’s and as recently as a week ago.”

Investigators say Hesse met the majority of the victims during overnight outings with a youth group at the Evangelical Free Church.  During his arraignment on August 21st Hess recanted his confession and changed his plea to “not guilty”.  Hess’s bail was set at 2,5 million dollars.


Note: Hesse is suspected of molesting boys for possible close to 30 years yet he was a vocal backer of Proposition 8 and belongs to a virulently anti-gay church.  He might as well have been a Catholic priest or bishop given the disconnect between what he did and what he preached.

Those poor boys, to think he got away with this for 30 years. I'd be surprised if it doesnt come out that many complaints were made to the yourth group and church, and they turned a blind eye to it.

I hope he rots in jail forever.