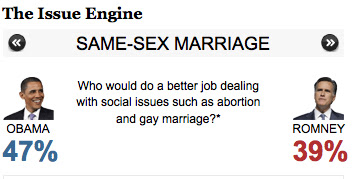 The Christofascist element of the Republican Party must be most unhappy with the results of a new Washington Post-ABC News poll that shows Americans by a significant margin believe that Barack Obama would better serve the nation on social issues than Mitt Romney.  Apparently, people are finally waking up to the extremism of the GOP, the Romney-Ryan ticket, and the theocrats who control the party.  Here are some highlights via the Washington Post:

On 13 issues and attributes tested in the poll, Obama has double-digit leads among voters on three: social issues, women’s issues and being more friendly and likable. On that last attribute, likability, Obama’s lead is a still-dominant 34 percentage points — 61 percent to 27 percent.

Obama’s predecessor, George W. Bush also had a 50 percent approval rating at this time in 2004. And it is Bush who provides a boost to Obama now — more than half of all voters see Bush, not Obama, as the one more responsible for the economic challenges the country faces.

The president has other advantages, too. On the choice of whether to create jobs by cutting taxes or enacting more government spending programs, spending holds a 14-point advantage among voters. Even among those who would prefer a smaller government, more than a third say spending is a better way for the government to try to spur job growth, as opposed to tax cuts.