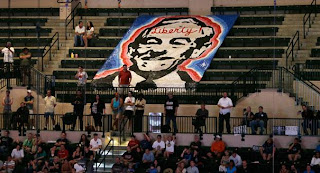 Despite the GOP's carefully orchestrated effort to present Mitt Romney yesterday as something less than a money loving, tax avoiding robot, things haven't sailed as smoothly in La La Land as hoped by the PR packaging team.  One of the big headaches?  Ron Paul and some of his delegates at the GOP convention.  Among the symptoms that not all is as well as some would pretend is Paul's own statement that (1) he won't endorse Romney/Ryan and (2) he's an undecided voter who just might not personally vote for the GOP ticket.  Then, there's the fight that broke out on the convention floor involving some of Paul's delegates.  First, here are highlights from Politico on Paul's statements:

Rep. Ron Paul said Tuesday he’s not planning to endorse the GOP ticket at the Republican National Convention and that right now, he’s an “undecided” voter.

The Texas Republican told Fox News’s Neil Cavuto that he expects to leave the convention without endorsing Mitt Romney and Paul Ryan, but that he “will probably vote” this November. Cavuto asked Paul if he leans more toward supporting Romney and the former presidential candidate said that “on certain issues,” he does.

Paul, who held a rally over the weekend for his supporters, told Cavuto he thinks the Republican ticket is “anxious; I think they’re really anxious to have our votes.” And although both Ryan and Romney have said recently they expect Paul supporters to come around to the Republican ticket, the Texas congressman said “they might be jumping the gun a bit.”


And yes, his delegates are indeed showing their independence and unwillingness to nominate Mr. Etch A Sketch. .  Here are excerpts from a Washington Post column:

As the new rules disenfranchising the Paul delegates came to a vote, shouts of “no!” and a cascade of boos poured from Paul supporters across the hall. Maine delegates at one end of the arena and Texas delegates at the other began chanting, “Point of order!” Demonstrators shouted down the next speaker, a Republican National Committee member from Puerto Rico, and party chairman Reince Priebus hammered his gavel, pleading for quiet. A Nevada delegate raised his middle finger at Priebus and called him an “[expletive] tyrant.”

Convention officials evicted some of the loudest demonstrators, who filled the hallways with shouts of “fraud!” and “farce!” and “sheep!” Paul supporters inside the hall resumed their booing and cries of “no!” — this time directed at House Speaker John Boehner (R-Ohio), who had taken the gavel.

The outcome of the dispute, in Romney’s favor, was never in doubt. But the episode illustrated a recurrent tension for the Republican nominee: the orderliness of his world colliding with chaotic reality. Romney is by many accounts a control freak, a stickler for rules and order. His campaign, following his instincts, runs the same way — and it has struggled mightily to stick to its script this week even as Hurricane Isaac zeroed in on New Orleans.

In that sense, the convention may be a valuable lesson in Romney’s leadership style. The presidency is one storm after another, some natural and others man-made. Can Romney adapt when a crisis causes a script change? So far, the indication is he expects the crisis to adapt to him.

Romney is an arrogant, out of touch from reality individual and it's frightening to think of him dealing with foreign leaders if he attains the White House.  His disastrous trip to the U.K. for the Olympics may well have been a glimpse of a Romney presidency.  People and other nations are not his corporate flunkies who can be forced to follow his dictates.
Posted by Michael-in-Norfolk at Wednesday, August 29, 2012