Who Is Really to Blame for the Nation's Debt 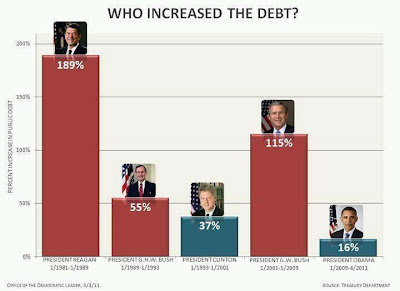 The Republicans and the Romney/Ryan campaign like to depict Barack Obama as a big spending liberal.  What has truly gotten the country is the big spending Republicans.  The chart above speaks volumes.  As I've noted before, the self-styled party of religious values does nothing but lie - a trait that must have come from its Christianist base.
Posted by Michael-in-Norfolk at Wednesday, August 29, 2012

i subscribe to harpers magazine and about a month ago, in harper's list, they published a detail showing that obama had actually raised the debt less than any president since truman.