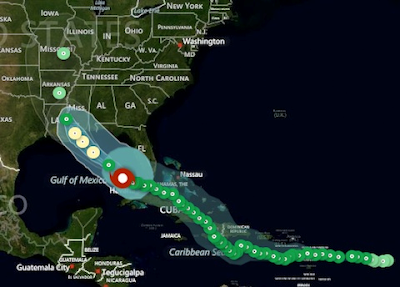 Today's events at the GOP convention have been cancelled and the agenda for the event has been revised because of Hurricane Issac.  But something worse may yet to come: media coverage focused on the storm rather than on the attempt to Etch A Sketch Mitt Romney into someone remotely likable.  As the New York Times notes, this is a possible nightmare scenario for the convention planners and the Louis XVI and Marie Antoinette like Mitt and Ann Romney.  Should the storm hit New Orleans, the shift in coverage may be even worse.  Here are highlights from the Times article:

It looks to be one of the worst nightmares for planners of Mitt Romney’s coronation.  At the height of the Republican National Convention this week, a potential Category 2 hurricane bearing winds greater than 100 miles per hour appears likely to slam into the Gulf Coast, perhaps close to the already battered city of New Orleans.

Searing images of wind-damaged homes, flooding and mass evacuations — all fraught with the memory of Hurricane Katrina — may well compete on television with Mr. Romney’s bid to seize the initiative in his battle with President Obama for the White House.

“Images of revelry by Republicans at a time of suffering by other Americans — no party wants those optics,” said Steve Schmidt, who helped lead Senator John McCain’s 2008 presidential campaign. “You have terrible awareness of all that stuff.”

But Mr. Schriefer declined to comment on the difficult imagery of conducting the convention at the same time that a storm hits the Gulf Coast.  “Until we know that and we can predict the weather, we are going to continue with our Tuesday, Wednesday, Thursday schedule,” Mr. Schriefer said.

Planners could decide to truncate the convention even more, canceling Tuesday’s activities or scaling back the festivities and speeches on some of the other days, out of deference to the imagery coming from the gulf.

But that carries risks, too. Mr. Romney is waging what appears to be a close race against Mr. Obama, and his campaign has been counting on the impact of the convention to present his argument for change to the largest audience Mr. Romney will likely have before the election in November.

Cutting back the convention even further would rob the campaign of a chance to make that case in the way they had been planning. It would probably mean that some high-profile speakers like Chris Christie, the governor of New Jersey, or Senator Marco Rubio of Florida, might lose their opportunity to address the convention.

That, in turn, would make it harder for Mr. Romney to present the kind of message that he wants ahead of the final nine weeks of the campaign after the party conventions.

Yes, I am enjoying the prospect of a major bust for the GOP's effort.  There truly is a sense of divine justice if this plays out.
Posted by Michael-in-Norfolk at Monday, August 27, 2012