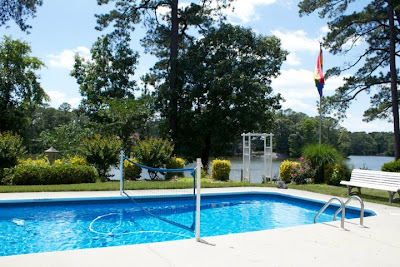 This afternoon after enduring yesterday's torrential down pours (some areas around here received 10 inches of rain) - we learned that our new industrial sump pumps in the house work -and family medical issues, the boyfriend and I joined some of our friends at the so-called County Club in Virginia Beach for some much needed down time.  The place isn't really a country club - it's the home of a friend who throws pot luck pool parties on Sunday afternoons when the weather permits. The food always ends up being great, the Madras punch is as well, and the camaraderie is wonderful.  I began going to the parties about 6 years ago, well before the boyfriend and I got together.  The mix of attendees varies and while it's typically an older crowd, we do see younger folks, some of whom are worthy of being "male beauties."

Today there were a number of new folks, some of whom are new to the area or who have been out of the social mix for some time.  And it made me think of my struggles after coming out to rebuild a new social world.  Yes, going to social settings where you don't know anyone - or perhaps only a handful of people - can be VERY stressful and unnerving.  But, it is something that one MUST do.  The first "County Club" party I went to I was a wreck, but I persevered and now I have dozens of friends that I might not otherwise have.

My message to those newly out - especially those coming out after years of marriage - is that it's hard work.  To make friends, one needs to make a concerted effort and keep going back to social settings until you get to know people and feel comfortable.  My other advice is to GET INVOLVED in LGBT community organizations.  It is the number one way to meet the kind of individuals one wants as friends - and possible life partners.  Again, it takes and effort and can be scary as hell, but the rewards are well worth the effort.

Email ThisBlogThis!Share to TwitterShare to FacebookShare to Pinterest
Labels: business networking, coming out in mid-life, friends, LGBT community, living out and proud, rebuilding a circle of friends, the boyfriend