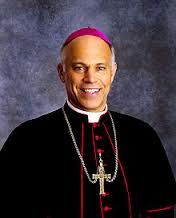 Things seem to be getting a bit curious about what exactly was really going in the early morning hours when new appointed Archbishop Salvatore Cordileone (pictured at right) - called by some the "father of Proposition 8" was arrested for DUI in San Diego.  Cordileone had said that he had been at dinner with friends and was driving his elderly mother home before he was to head home himself.  As Fr. Geoff Fallows (who got booted from his parish for refusing to support Prop 8) has picked up, that may not be the entire story: Cordileone had a young male in the car as well -something not mentioned if Cordileone's story line.  Obviously, a number of questions become relevant, including why Cordileone not mention this other passenger.  Here are some details from Fr. Geoff's blog:

Listen very carefully to the announcer of a local San Diego news station:

“According to police, 56 year old bishop Salvatore Cordileone was driving along the edge of SDSU when he entered a sobriety checkpoint he appeared drunk and was arrested shortly after midnight. He was in the car with his elderly mother and a foreign exchange student, a young male adult.”

If San Francisco Archbishop-elect Cordileone were just the simple priest that he claimed to be to at his arrest, his superior would have demanded explanations.

What were you doing driving drunk?

What was a college student doing in your passenger seat at that time of night?

After you dropped off your mother, where did you intend to go, and what were you going to do when you arrived?

Have you ever spent time with, or socialized, with this young man prior to your arrest? If so in what context and what is the nature of your relationship?

The matter would be brought to the attention of the bishop, and it would most probably affect his career and, of course, it would be handled discreetly.

The fact that Cordileone’s mother was present in the car with Cordileone and the young student would not clear the concerns or suspicions from the mind of a superior. Consider the statements of the police:

“Cordileone's mother, who was a passenger, was allowed to drive the mid-size black car home following her son's arrest after officers made sure she had not been drinking and had a valid license, McCullough [the arresting police officer] said.”

"He was a driver that was obviously impaired,” Officer Mark McCullough also stated.

These two statements from police clearly indicate that Cordileone’s mother was sober and capable of driving the car that night. The second statement by officer McCullogugh that “he [Cordileone] was…obviously impaired” raises some serious questions about both the judgment and the laxity of Cordileone’s mother, with respect to her son. She can’t tell, or is unwilling to protest, that he is obviously drunk and poses a threat to human life behind the wheel of an automobile. How objective and outspoken would she be about a possible inappropriate relationship with a young student?

A superior/pastor/bishop would ask all of these questions of Salvatore Cordileone and so, it surprises me that the press does not. Then again, the Catholic hierarchy has much experience in managing the press. This is not a story they want pursued, it would be highly inconvenient in an election year. Especially on the same week that the head of the United States Conference of Catholic Bishops (USCCB), New York Archbishop cardinal Dolan blesses the Republican National Convention and Mitt Romney’s bid to replace Obama as President. If Romney wins, the USCCB’s social conservativism will become national policy and this increases both USCCB [Vatican] power and prestige.

Cordileone is not a simple priest. He is:  “Known as "the architect of Proposition 8," the 56-year-old played a pivotal role in convincing many Catholic organizations in California to help bankroll the 2008 campaign to overturn the state's same-sex marriage law. With his help, Prop 8 supporters raised some $1.5 million, which went a long way toward helping get the measure passed.”


It all may be an innocent situation.  However, the fact that Cordileone apparently deliberately never mentioned the young man raises the old question of "if you have nothing to hide, then why hide something."  People deserve an answer to the questions Fr. Geoff raises and I hope the full story comes out.  Obviously, it would be deliciously ironic if Cordileone is exposed as a closet case who got caught. It would be in keeping with the pattern of loudest homophobes actually being gay themselves. :)

Posted by Michael-in-Norfolk at Saturday, September 01, 2012