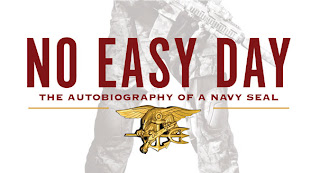 Knowing a number of past and present Navy Seals, it has been disheartening to see some of that group rush to make money or - like local Scott Taylor, a failed GOP candidate who lost the nomination to hate group endorsed Scott Rigell - or shore up their bona fides with far right elements of the Republican Party.  Worse yet is the fact that the truth seems to lose out to whatever best fits the author's or spokesman's personal agenda be it cash or political advantage.  Thankfully, the Pentagon appears to have perhaps had enough of the partisanship and greed and is threatening legal action against at least one of these, in my opinion, less than honorable individuals. Politico has coverage on the development.  Here are excerpts:

The Defense Department is threatening to go after an ex-SEAL author and his publisher over a new book that challenges the administration’s official account of last year’s raid that killed Osama bin Laden.

The Pentagon late Thursday released a letter from its top lawyer, Jeh Johnson, to publishing giant Penguin and “Mark Owen,” the pseudonym of an ex-SEAL special operator who has been identified as Matt Bissonnette. In the letter, Johnson said Bissonnette had breached non-disclosure agreements he signed while on active duty in 2007.

According to official Navy records obtained Thursday by POLITICO, Bissonnette served in the Navy from 1998 until April of this year. Johnson wrote that the NDA he’d signed remained in effect “even after you left the active duty Navy.”

Johnson closed by informing “Owen” and Penguin that the Defense Department “is considering pursuing against you, and all those acting in concert with you, all remedies legally available to us in light of this situation.”

The Pentagon could ask the Justice Department to try to prosecute Bissonnette or seize the royalties raised by the book, which is officially due out Monday but has already gone on sale in some places.