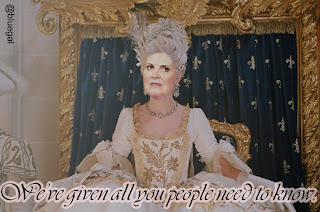 Candidly, I did not watch Ann "Marie Antoinette" Romney's speech last night.  I'd had a late dinner after a local political event and frankly did not want to end up hurling it up with her disingenuous and self-serving act.   But, from what I'm reading, many found her effort to humanize her robot husband unsuccessful.  It's not surprising given Mitt Romney's cluelessness about ordinary Americans' lives, his obsession with money (and avoid taxes) and his sense of entitlement that seeps through constantly.  Even her story about their lives during his student days underscored the alternate reality that Mitt and Marie Antoinette live in.  Here's part of the analysis from a Washington Post column:

Ann Romney gamely attempted to humanize her husband, Mitt, at the Republican National Convention on Tuesday night, and you could tell. She provided the sorts of details about their early marriage that politicians and their spouses often have on hand to make themselves seem relatable — their dining-room table was an ironing board, on which they ate a lot of tuna fish and pasta — right after explaining that Mitt’s father ran an auto company. And she kept insisting — too much — that Mitt makes her laugh.

In fact, Ann Romney’s most powerful lines were not about how Mitt Romney is just like the rest of us — but how he has shown himself to be very different.  .   .   .   .  Mitt Romney’s most impressive and consistently manifest attribute is his inhuman work ethic. That also points to one of Mitt Romney’s greatest weaknesses — it remains utterly mysterious to what end, beyond his own advancement, he wants to apply all that talent and drive.


A piece in Mother Jones had a similar reaction.  Here's the relevant quote:

[D]id anyone else notice that even Ann Romney was almost entirely unable to humanize Mitt? She talked about the things he had done, but hardly at all about the kind of person he is. There was a brief reference to Mitt being "warm and loving and patient" — and helpful to friends in trouble — but after that it was all about Mitt being hardworking and successful. In other words, pretty much the corporate drone we all think he is. I doubt very much that this really helped the Republican cause with women much.


And then there's this quote from from The Atlantic:

Ann Romney talked about living in a basement apartment while Mitt Romney was in grad school, but as David Shuster notes, they were living off stock options. Christie just mentioned moving into a "studio apartment" with his wife when they were first married. I hope one day I can look back on my young person's middle class real estate experience as stark poverty.

Posted by Michael-in-Norfolk at Wednesday, August 29, 2012