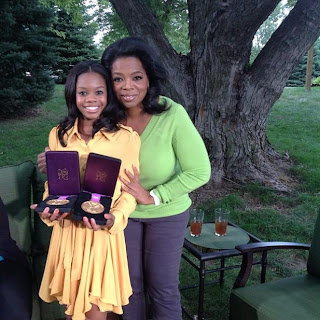 Virginia Beach has been quick to claim Olympic gold medalist Gaby Douglas as a local celebrity, but on Oprah Winfrey's show, Douglas said she felt bullied in Virginia Beach and the victim of racism.  In fact, she cited the bullying as a reason for her move to train in Iowa.  Who would have thought this could happen in Virginia?  Anyone with half a brain.  Although less so with every passing year, Virginia is still part of the old Confederacy and some mindsets are still widely prevalent if one scratches the surface.  Racism is one of those mindsets as is rampant homophobia in some circles (think Virginia GOP for but one example).  Needless to say, folks in Virginia Beach are none too please with their latest publicity.  The world is changing, but sadly many in Virginia are not.  Here are excerpts from the Virginian Pilot's coverage:

Coaches at Excalibur Gymnastics on Monday vehemently denied charges by Gabby Douglas of bullying and racism at the gym.

Douglas made the accusations Sunday night on Oprah Winfrey's television show, "Oprah's Next Chapter."
On the show, Douglas, 16, the first African American to win an Olympic gymnastics all-around gold medal, talked about her reasons for leaving Excalibur two years ago to train with coach Liang Chow in Iowa.

"One of my teammates was, like, can you scrape a bar. And they were, like, why doesn't Gabby do it, she's our slave. I definitely felt isolated," Douglas told Winfrey during the broadcast. "I felt, 'Why am I deserving this? Is it because I'm black?'  "Like, those thoughts would go through my mind."

On the show, Douglas also talked of bullying - something Walker said goes on to some extent in every gym. "Every school, every group of kids... it's just one of those things that happen from time to time with normal kids," Walker said. "But I have no knowledge of anything serious, and Gabby never complained about anything like that."


Who knows what the real truth may be, but given the bigotry that I've seen, I tend to believe Douglas.  If the truth hurts, then Virginia and its residents need to change and get into the 21st century.
Posted by Michael-in-Norfolk at Tuesday, August 28, 2012