The GOP Fears the Ghost of Katrina 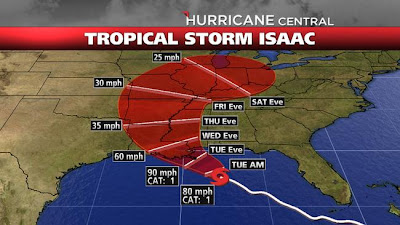 As the delusional and out of touch Republicans begin their coven in Tampa, one ghost is hanging over the convention: the prospect of Hurricane Issac hitting New Orleans just as the show comes to its crescendo.  Equally terrifying is the prospect that the Obama administration's response to wherever the storm hits will further under score the GOP incompetence that followed Hurricane Katrina almost exactly 7 years ago.  Politico has this on the ghost's specter:

Republicans have begun to whisper a grim word that sums up all their fears about the 2012 party gathering: Katrina.


No longer is GOP fretting focused on the prospect of Tropical Storm Isaac striking Tampa and blowing up party’s plans to crown Mitt Romney as its nominee. There’s still the possibility of logistical disruptions, but an epic meteorological mess doesn’t appear to be in the offing here.

Instead, party officials and convention planners are increasingly anxious about a different and possibly more damaging scenario: a split-screen broadcast of Republicans partying in Tampa alongside images of serious storm damage in states such as Louisiana and Mississippi.

Some Republicans here worry the juxtaposition of events could revive memories of the disastrous 2005 storms — Hurricanes Katrina and Rita — and the government’s terrible handling of them.

Public outrage over the George W. Bush administration’s response to those catastrophes — Katrina especially — shadowed the president and the GOP for years. For Republicans, Katrina is their version of the Carter administration’s failed Iranian hostage rescue in 1980 — an enduring symbol of collective incompetence, a political wound that will not heal.


What one hopes will come out of the storm coverage over the next few days is the fact that among the many cuts sought under the Romney-Ryan budget is emergency response agencies that are needed in precisely this type of situation.  The rich would benefit while others might be left literally to drown.  Such are the GOP's "values" nowadays.
Posted by Michael-in-Norfolk at Tuesday, August 28, 2012