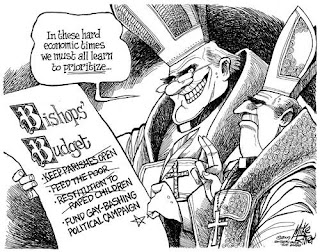 I noted recently that the Diocese of Yakima, Washington, was directing all churches in the diocese to have a special collection effort in September to raise money to help overturn Washington State's marriage equality law enacted earlier in the year.  Now, the state has stepped in and told the Catholic Church that it cannot proceed with its plan without violating the state's campaign finance laws (I still believe the IRS needs to step in as well).    It's yet another example of the "godly Christian" folk believing that they are above the laws that govern the rest of us.  I hope the state goes after NOM as well.  The Boston Edge has details on the smack down received by the Catholic Church.  Here are highlights:

Last week, Yakima Bishop Joseph Tyson sent a letter to pastors in 41 parishes of the Yakima Diocese asking them to announce a special collection that would go to Preserve Marriage Washington, which is fighting the same-sex marriage law that was passed earlier this year. The diocese’s chief of staff, Monsignor Robert Siler, said Tuesday that the expected collection date was Sept. 8-9.

But Lori Anderson, a spokeswoman for the state’s Public Disclosure Commission, says no organization can be an intermediary for a contribution. She says the church can hand out envelopes, but either a member of Preserve Washington has to be on hand to collect them or parishioners must send them in individually.  Anderson said the restrictions stem from Initiative 134, which voters passed in 1992 to regulate political contributions and campaign spending.

Siler said the diocese coordinated its efforts with the Washington state Catholic Conference.

Anderson said that even so, what the church is proposing to do is what federal laws refer to as "bundling," and that isn’t allowed under state law. Anderson said PDC officials would be reaching out to church officials in the coming days.  "We just want to make sure they understand what they can and can’t do," she said.

"Under state law, no one can be an intermediary for a contribution," Anderson said. "It doesn’t matter if it’s a loose pile of money or if each is in a little envelope."


I hope the state holds tough against the Church and shuts down their effort.
Posted by Michael-in-Norfolk at Thursday, August 30, 2012