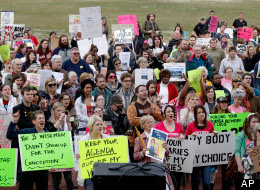 The Christofascists continue to push for "personhood" laws or state constitutional amendments aimed at outlawing all abortion under any circumstance and in the process also outlaw many forms of birth control and artificial insemination procedures.  It's all about imposing one extreme religious belief on all citizens in the state in question.  Fortunately, in Colorado the effort to get a personhood initiative failed.  At least for now.  Nonetheless, it ought to be a message to all, but women in particular, that the Christofascists are still gunning to take away people's rights and control of their own bodies.  A piece in Religion Dispatches looks at the Colorado effort.  Here are highlights:

Colorado’s fetal personhood ballot initiative petition failed to get enough valid signatures, and so the measure will not appear on the ballot, Colorado Secretary of State Scott Gessler announced this morning.


According to the Denver Post, some of the signatures were deemed invalid, so the petition was found to have only 85,800 valid signatures—305 signatures short of the required 86,105. Jennifer Mason, speaking for Personhood Colorado, said that the group has hired an election attorney and is confident the measure will still appear on the ballot. (Ms. Mason is also the Communications Director for Personhood USA, the Colorado-based umbrella group coordinating the state personhood efforts.)

The amendment’s text would make it illegal to intentionally kill “any innocent person”—with “person” defined as “every human being regardless of the method of creation,” and “human being” defined as “a member of the species homo sapien at any stage of development.”

But the proposed text doesn’t define what to my theological ears is the more provocative term: “innocent.”
Presumably, its use here is meant to do several things: (1) portray the fetus as an agent with moral standing, one in need of protection; (2) allow for the taking of guilty human life (since many social conservatives support the death penalty while also being opposed to abortion); and (3) contrast the innocence of the fetus with the guilt of the father. Indeed, on the last point, the amendment draws this contrast specifically: “No innocent child created through rape or incest shall be killed for the crime of his or her father.”

But notice, where rape and incest are concerned, it is only the fetus’ innocence that’s stipulated.

See, if I were talking about the innocent people injured by rape, I would eventually consider the person who was raped.  .   .  .  .    So is that woman “innocent,” on the personhood movement’s terms?  .  .  .  .  Or, alternately, is she sorta innocent, but not to such a degree that she should be spared having to endure a pregnancy?


What strikes me most about the conservative extremists who back bills such as this one are usually one and the same with those who want to slash funding for the poor, including children.  The worship the fetus in the womb, but once the fetus is born and becomes a child, they throw that child to the curb.  I simply do not get the mindset.
Posted by Michael-in-Norfolk at Friday, August 31, 2012