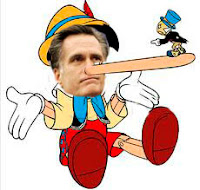 Last night Mitt Romney capped off what may go down as one of the most dishonest political conventions ever - a fact that even Clint Eastwood's bizarre appearance cannot deflect.  Like his VP nominee, Paul Ryan, Mitt Romney rewrote history to fit his needs regardless of how shockingly untrue it was to anyone had not been drinking the GOP's Kool-Aid by the bucket full. This reality hasn't been lost on many in the media.  The New York Times has a great slap down of Romney's dishonesty.  Here are highlights:


Mitt Romney wrapped the most important speech of his life, for Thursday night’s session of his convention, around an extraordinary reinvention of history — that his party rallied behind President Obama when he won in 2008, hoping that he would succeed.

The truth, rarely heard this week in Tampa, Fla., is that the Republicans charted a course of denial and obstruction from the day Mr. Obama was inaugurated, determined to deny him a second term by denying him any achievement, no matter the cost to the economy or American security — even if it meant holding the nation’s credit rating hostage to a narrow partisan agenda.

[N]o subjects have received less attention, or been treated with less honesty, than foreign affairs and national security — and Mr. Romney’s banal speech was no exception.  It’s easy to understand why the Republicans have steered clear of these areas. While President Obama is vulnerable on some domestic issues, the Republicans have no purchase on foreign and security policy.

Mitt Romney has tried to sound tough, but it’s hard to see how he would act differently from Mr. Obama except in ways that are scary — like attacking Iran, or overspending on defense in ways that would not provide extra safety but would hurt the economy.

Read the rest of the editorial which details more of the disingenuous bull shit being spouted by Mr. Romney and the GOP.
Posted by Michael-in-Norfolk at Friday, August 31, 2012