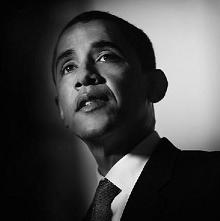 No doubt yesterday's disaster in North Carolina will make Barack Obama try even harder to obfuscate whatever his true thoughts on same sex marriage may be.  Assuming he sees the issue in any context other than political maneuvering analyzing polls versus what voters actually do once inside the voting booth.  Meanwhile, of course, real LGBT lives are damaged and children of LGBT parents face increased financial instability and the denial of benefits that the children of straight couples take for granted. And that's not even addressing the corrosive emotional effects of bigotry written into state constitutions and federal laws.  A lengthy op-ed in the New York Times looks at Obama's bizarre dance around the issue of same sex marriage and offers up explanations of Obama's cowardice while looking at the reality that sometimes doing the right thing doesn't fit cleanly with political gamesmanship.  Here are some excerpts:

In the latest Gallup poll, 50 percent of Americans support redefining marriage to include same-sex couples – which is more than the percentage of Americans that supported the Affordable Care Act, think favorably of the controversial 2009 stimulus package, or approve of Barack Obama’s job performance in general. Among independent voters, meanwhile, support for same-sex marriage is up to 57 percent, meaning that more independents support same-sex marriage today than voted for Obama during his easy victory in 2008.

Given these numbers, it seems a little strange that the president is so unwilling to acknowledge what every non-delusional Washington observer believes to be the case – that like his voluble vice-president, he is part of the emerging pro-same-sex-marriage majority, rather than the opponent that he still officially pretends to be. Why does a president who declined to defend the Defense of Marriage Act persist in the ridiculous pretense of an “evolving” position, one might reasonably ask (an evolution that will be complete, one assumes, the day he wins re-election), when same-sex marriage might actually be a political winner, and his wink-and-a-nod approach to the issue looks so transparently calculated?

Journalists looking for an answer to this question have largely focused on the possibility that a presidential shift on same-sex marriage might depress Democratic turnout among blacks and Hispanics, two crucial constituencies in which support for same-sex unions is lower than in the country as a whole.

But there are two deeper reasons why the president might be leery of being honest about what we can reasonably assume are his actual convictions on the issue.

The first reason is that while the increase in public support for same-sex marriage over the last two decades has been astonishingly swift, it has not been irreversible. Instead, sudden bursts of legal momentum – mostly driven by judicial rulings, from Massachusetts to Iowa – have often prompted temporary backlashes.

The second reason for the White House’s caution is that opinion polling has consistently understated opposition to same-sex marriage since the issue rose to national prominence. Voters who say they support it when Gallup and other pollsters come calling can behave very differently in the privacy of the voting booth.
In a 2010 paper, for instance, the New York University political scientist Patrick J. Egan compared polling in advance of state same-sex marriage referendums to the actual results, and found that


the share of voters in pre-election surveys saying that they will vote to ban same-sex marriage is typically seven percentage points lower than the actual vote on election day.

That seven-point gap between appearances and reality may help explain why same-sex marriage supporters lost referendums they expected to win in liberal states like Maine and California.

But to say that the president’s approach is understandable does not mean that it’s necessarily defensible. Supporters of same-sex marriage have worked very hard to frame their issue, not as an ordinary political conflict, but as an all-or-nothing question that pits enlightenment and progress against reaction, bigotry and hate. I don’t accept that framing, but I accept that its architects genuinely believe in it, and see the conflict over same-sex unions as a clear-cut struggle between good and evil, with no possibility of middle ground.


If same-sex marriage isn’t an issue where people can disagree in good faith, though, then the president’s evasions and obfuscations can’t be treated as ordinary political maneuverings, and excused as just so much politics-as-usual. If the debate is as black and white as many supporters of same-sex marriage argue, then they should be much harder on political leaders who pretend that it’s a gray area.

Indeed, if you accept the framing of the debate that many liberals (and many journalists) embrace, then you have to acknowledge that President Obama has spent the last four years lying to the American people about his convictions on one of the defining civil rights issues of our time, and giving aid and comfort to pure bigotry in the service of his other political priorities.

This is a harsh indictment, but it’s one that follows inexorably from premises that many of the president’s own supporters have wholeheartedly embraced. If they hold true to these premises — and the press holds true to its obligations — then the kind of uncomfortable questions the White House spent this week dodging will be asked again and again of the president over the course of the campaign to come.