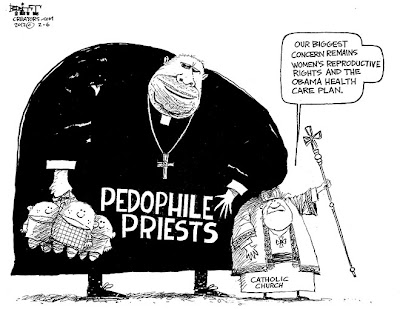 I've noted many times that ridding the Catholic priesthood of sexual predators and punishing those who enabled them and covered up their misdeeds for decades if not longer continues to be nowhere on the radar screen of important issues for the Church hierarchy.  Attacking and opposing full civil rights for LGBT citizens, opposing contraception, launching disingenuous claims that "religious liberty" is under attack, etc., are important to this sick group of self-centered men, but not the rape of children and youths.  Or at least not until it causes media embarrassment.  The Washington Post takes note of the sick priorities of the bishops and hierarchy in it's lead editorial today.  Here are highlights:

BY THE CATHOLIC Church’s reckoning, it has undergone a sea change since the days when sexual predators in clerical collars sexually abused young boys with scant fear of dismissal, reprimand or even excessive concern by their supervisors.

Yet despite the hierarchy’s insistence that it is investigating and rooting out sex criminals, the church often seems stuck in a defensive crouch. Too often it has failed to move against abusers and those who tolerate them until forced to do so by legal action or the threat of full-blown scandal.

In its reluctance to discipline Catholic leaders who covered up or ignored sex crimes, the church also deepens the impression that it remains focused more on safeguarding its image than protecting victims.

Worryingly, there are even signs that the church’s passivity has morphed into hostility toward its accusers. In March, the New York Times reported that lawyers for the church have launched a campaign against a group that has championed the victims of pedophile priests, asking courts to force the group to disclose more than 20 years of e-mails. The organization, the Survivors Network of those Abused by Priests, known as SNAP, says that the church’s action is a serious threat to its advocacy.

While Catholic leaders insist they have turned the tide against clerical sexual abuse, the church’s behavior suggests that its default is to protect the abusers and their supervisors who turned a blind eye. Until that changes, the church’s promises of zero tolerance will remain an illusion.