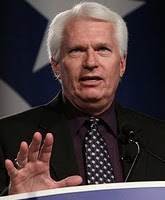 Sometimes I think the nastiest opponents of LGBT equality - or in some cases, our very lives - over the longer view unwittingly end up helping our cause.  Their very foulness, hatred and vitriol against LGBT citizens causes a revulsion by decent people and drives all but the most homophobic and self-loathing closet cases to our side of the battle.   The other useful role they play is to drive spineless politicians like Mitt Romney to pander to them and in the process adopt extreme positions that further poison the anti-gay brand.   A case in point is the American Family Association's Bryan Fischer.  The man is so violently anti-gay and so outspoken in his batshitery that only a Kool-Aid drinking Bible beater would not find him offensive.  BuzzFeed has done a profile on Fischer that underscores just how far away the amn is from the mainstream, not to mention common decency.  With time, if we are lucky, Fischer will become synonymous with the anti-gay, hate filled Christianists.   An only slightly less crazy Fred Phelps image, if you will.  Here are profile highlights:

The most famous man in Tupelo spends hours each day scrolling through his Google Reader, printing out articles, and stacking them by topic on his dark wooden desk in preparation for his afternoon radio show.  And that’s how the stunning news reached Bryan Fischer one recent Friday morning: Mitt Romney had hired an openly, proudly gay man, Richard Grenell, as his foreign policy spokesman.

“I felt it was a signal from Romney to the homosexual lobby, that you’ve got a friend,” recalled Fischer, the whose formal title is Director of Issue Analysis for the American Family Association.  Fischer sounded the alarm on Twitter: “Romney picks out & loud gay as a spokesman. If personnel is policy, his message to the pro-family community: drop dead.”

“We got Romney’s attention with Richard Grenell,” Fischer said in an interview in his Tupelo, Mississippi office. “We spooked him. Scared him straight.” Fischer sat back in his chair, a picture of Elvis Presley gyrating his hips on the wall behind him.  Grenell’s departure, Fischer told the audience of his show on the AFA’s talk radio network, “a huge win” for religious conservatives.

[A]s other conservative leaders have sought to move with the times, Fischer has tacked in the opposite direction, toward strident and unapologetic attacks on homosexuality in particular. And as bluntly anti-gay rhetoric becomes associated with the fringe — with, in particular, the Topeka-based Westboro Baptist Churck and its notorious “God Hates Fags” signs — the 61-year old Fischer, may be the last out-and-proud anti-gay conservative still inside the Republican Party tent. Every Republican candidate except Romney visited Fischer’s show this year, and he regularly hosts Republican members of Congress. He has a key speaking slot at the Values Voter Summit every year, and the organization shrugged off Romney’s all-purpose denunciation of Fischer at last year’s summit as a speaker of “poisonous” language.  The Grenell issue was illustrative of Fischer’s new, leading role. Other voices on his side were notably more cautious
Getting Fischer’s message out is now a large-scale production at the AFA’s Tupelo headquarters.   .   .   .  “I’m absolutely convinced that homosexual behavior should never be normalized by rational thinking members of society,” he told BuzzFeed. “Therefore I will resist efforts to normalize homosexuality until the day I die because I think it’s bad for the country.”

He [Tim Wildmon]  said there have been two instances in the past two years when he’s asked Fischer to take something off the site. One was a post asserting that Native Americans were “morally disqualified” from controlling territory in North America. Another was a column using the example of Magic Johnson’s health to question whether or not HIV really leads to AIDS.

[I]f the Grenell episode advanced the left’s perception of Fischer as a bigot, it did something more important, in Fischer’s view: It taught Mitt Romney a lesson. Fischer has been spoiling for a fight with Romney at least since last October, when Romney blasted Fischer’s “poisonous” speech — a line delivered with Romney’s characteristic ambiguity, and referring to Fischer’s speech about gays, Muslims, or Mormons, or any combination of the three.

“The question for Gov. Romney is this,” Fischer told BuzzFeed. “The Mormon Church teaches that homosexual acts are ‘sinful’ and ‘offensive to God.’ Is your church a ‘voice of intolerance?’”