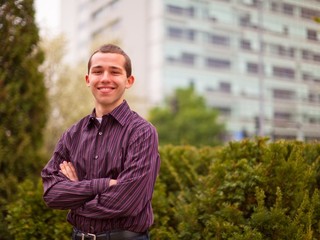 The hypocrisy and just plan meanness of the Roman Catholic Church seems to never cease.  While the Vatican claims that it holds that gay individuals are to be treated with decency, every policy of the Church tells a far different story.  It's a story of constant attacks and efforts to humiliate and denigrate gays on every front - not to mention denying us our civil rights under the CIVIL laws.  A story out of Iowa demonstrates the petty lengths that the protectors of child rapists will go to deny respect and any shred of honor to LGBT individuals.  Keaton Fuller, a senior at Prince of Peace Catholic School in Clinton, Iowa, has won a $40,000 college scholarship from the the Des Moines-based Eychaner Foundation.  The diocese of Davenport will not allow the foundation to present the scholarship to Fuller at a school awards ceremony because the scholarship is given to students who are openly gay, lesbian, bisexual, or transgender. The diocese says that its policy bars any organization which promotes a position contrary to church teachings from giving school presentations.  Child rapist protectors like Benedict XVI are apparently fine, but a foundation granting scholarships to LGBT students is verboten.

Via the Eychaner Foundation Fuller had this to say in an open letter to his school:

Being the lone openly gay student in a small, Catholic school has not always been easy. Upon first realizing I was gay, I suffered a lot of anxiety over wondering how everybody in this school would treat me if I were to tell people the truth about my sexual orientation. When I did begin to tell people, I was pleasantly surprised and touched to find that nearly everybody treated me with the same acceptance and respect as they always had. I have always been very grateful to all of you for this.

I have never felt as invalidated and unaccepted as I have upon hearing the news that the scholarship that I have worked so hard for not just in the application process, but also in my deportment and actions over the years, would not be recognized in the way that it should at the graduation ceremony It is difficult to understand how after I have spent thirteen years at this school and worked hard during all of them, I would be made to feel that my accomplishments are less than everybody else’s. This whole ordeal has been incredibly hurtful, and I am even sadder that this will be one of my last experiences to remember my high school years by.

Keaton's parents, Randy and Patricia Fuller, stand behind their son and are upset that he will not be recognized at the awards ceremony with his classmates.

It is noteworthy, however, that the Catholic laity increasingly rejects the Church hierarchy's jihad against LGBT individuals.  Indeed, a majority of American Catholics support same sex marriage.  Now, if they would just cut off the money spigot and hit the Vatican where it hurts.

If you find this situation, sign the petition telling the school and the diocese what you think of their bigotry and hypocrisy.  The petition is here.
Posted by Michael-in-Norfolk at Tuesday, May 08, 2012