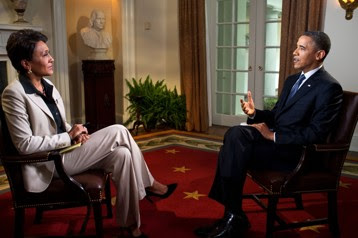 The airwaves and blogosphere are a twitter with news of and reactions to Barack Obama's ABC News interview this afternoon during which he finally stated that he personally supports same sex marriage.  I suspect that his words had been carefully planned and the timing was interesting - the day after North Carolina voters told LGBT citizens of that state that they (and their children) were deemed less than human and undeserving of any recognition of their relationships.  Perhaps Obama felt that he had to do something after the harsh criticisms of his failure to strongly denounce Amendment One.  We will likely never really know all of the motivations that led to today's action.  Not surprisingly, Mitt Romney condemned Obama's statement and said he supported only one man one woman marriage - just as he was likely directed to do by his Christofascist/Mormon puppeteers.  The Washington Post reports on the development.  Here are highlights:


President Obama endorsed same-sex marriage Wednesday, capping days of frenzied speculation about his views and intensifying pressure from gay campaign donors that began with surprising comments on the issue over the weekend by Vice President Biden.  The announcement marked an apparent end to Obama’s self-described “evolution” on the issue.

“I’ve just concluded that for me personally it is important for me to go ahead and affirm that I think same-sex couples should be able to get married,” Obama told Robin Roberts, in an ABC News interview.  Obama went on to explain that he had “hesitated” on marriage because he thought same-sex unions would be “sufficient” in order to guarantee rights for couples such as hospital visitations. And he said he wanted to be “sensitive” to the fact that for many Americans, the word “marriage” evokes “very powerful positions, religious beliefs and so forth.”

The president’s challenge was evident in Tuesday’s vote in North Carolina, one of the campaign’s targeted states, where voters overwhelmingly backed a constitutional amendment to ban same-sex unions.
Obama’s campaign released a statement describing the North Carolina results as “disappointing.”

At an event at the Oklahoma Republican Party’s headquarters in Oklahoma City, presumptive GOP presidential nominee Mitt Romney responded to the news of Obama’s same-sex marriage shift by reiterating that he himself continues to believe that marriage is between one man and one woman.

On Capitol Hill, Democrats warmly supported the president’s new position.  House Minority Leader Nancy Pelosi (D-Calif.) said the president’s statement “marks progress for the civil rights of LGBT Americans and all Americans,” and added later that “Republicans are standing on the wrong side of history.”

Obama’s shift Wednesday followed days of frantic phone calls and conversations between campaign officials and leading activists and donors in the lesbian, gay, bisexual and transgender community.  .   .   . At least one in six Obama bundlers are gay, according to a Washington Post count, making it hard for the president to ignore the growing frustrations.

“The top 12 gay and lesbian donors in this country have all maxed out to the president, but they have not played in the super PAC world yet,” this adviser said. “And if there is the expectation that they’re going to, then there will have to be some concrete actions in fairly short order to demonstrate this administration’s desire to keep them included in this campaign.”   The dynamic — and Obama’s decision to sit for the interview Wednesday — underscored how much the president can ill afford to alienate any piece of his base in what is expected to be a tight election.


As to the risks to Obama's action will generate, another Washington Post column looks at the issue.  Here are highlights:

Now that the President is on record in support of gay marriage, it’s worth breaking down the political pluses and minuses of that position.  Let’s start with the pluses.

1. Public opinion: The movement in national polling on the issue is something rarely seen; support for gay marriage is rapidly rising even as opposition rapidly erodes.
2. Excite the activist base: The LGBT community is not only a major part of the Democratic base but they also comprise some of the most politicalyl active people in the party. While Obama had a case to make — his decision to end “Don’t Ask, Don’t Tell” and the Justice Department’s announcement that they won’t defend the constitutionality of the Defense of Marriage Act — that he had already done a lot for the LGBT community, this is a cherry on top that wins him not only their votes but, as importantly, their volunteer hours.

3. Excite the donor base: One in six Obama’s 2012 campaign bundlers are gay, according to research conducted by the Post’s Dan Eggen and T.W. Farnam. Couple that fact with the news earlier this week that George Soros, one of the most prominent Democratic major donors in the country, was directing his contributions to grassroots groups rather than the super PAC expected to fund TV ads supporting Obama and it’s clear that the president badly needs a heavy investment from Hollywood and Silicon Valley. And those two communities are heavily in favor of gay marriage.

4. Rally young people: It’s no secret that for President Obama to win, he needs a heavily consolidated vote among 18-29 year olds. And, polling suggests that the age group most supportive of gay marriage is — you guessed it! — 18-29 year olds. In a year’s worth of Post-ABC polling — from March 2011 to March 2012 — fully 65 percent of people aged 18-29 say gay marriage should be legal while 61 percent of those aged 30-39 said the same.

And now, the minuses.

1. Not a slam dunk: As we wrote earlier this week, while a majority of people in the country now favor gay marriage it’s far from the sort of overwhelming majority that would prompt Obama to change his position .   .   .   .     Key subgroups like white voters (53 percent support legalization/43 percent oppose it) and voters aged 40-49 (52 percent support) are only narrowly on board with legalization. And, in an election year, no politician — including Obama — wants to tackle an issue where public opinion is that closely divided.

2. The black community: If the LGBT vote is a pillar of Obama’s base, the African American vote is an even bigger pillar. (In a recent Post poll in Virginia, Obama was beating former Massachusetts governor Mitt Romney 97 percent to one percent among black voters.) And, African Americans have consistently been one of the groups most resistant to gay marriage.

3. Virginia/North Carolina: President Obama won both states in 2008 and his campaign is targeting both again in 2012.  .   .   .   .   While both states have changed demographically and politically over the past decade (or so), large portions of both states remain culturally quite conservative and might balk at Obama’s support for same-sex marriage.

4. Flip flopping: Romney has a reputation for flip flopping that Democrats have made considerable political hay out of over these past few months. Obama’s change on gay marriage allows Republicans a strong counter to the charge that their nominee is the only one in the race who lacks a core.