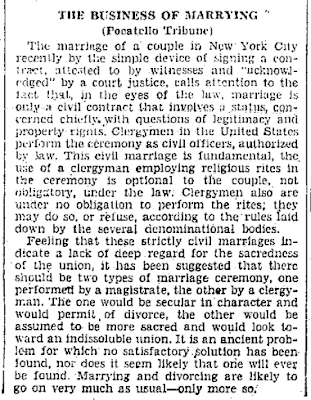 You have to hand one thing to the Christianists and their political whores in the Republican Party - they are some of the most consistent liars one might ever meet.  Nothing, including the truth and actual real history are never allowed to get in the way of the lies they spin to support their anti-gay marriage agenda.  Time and time again, both in North Carolina before Tuesday's horrific vote and now in the wake of Barack Obama's embrace of marriage equality yesterday, they spout the myth that "God created marriage as one man and one woman."  It's a complete lie, of course, but then again, these people think the Commandment against lying and bearing false witness doesn't apply to them.  So much for actually honoring the Bible and the Ten Commandments.  Several pieces I came across today, not to mention two old newspaper clips that my LGBT blogger compatriot Jeremy Hooper posted at Good As You underscore the grossness of  lies being disseminated by the Christianists and their pandering prostitutes in the GOP.  The first newspaper clip is at the top of this post.  The date of the article is July 29, 1937 - and note the emphasis on marriage being a CIVIL law institution first and foremost.

Even more damning is a piece in the New York Book Review Blog that tarces the history of marriage in the first 1200 years of the Christian church.  The truth is that through the end of the Roman Empire, Roman civil law controlled marriage.  Even after the Empire fell, it was another nearly 750 years before the Church adopted a uniform marriage policy.  That's right, for the majority of Christianity's history marriage was not even a Church sacrament.  Here are some excerpts:

Why do some people who would recognize gay civil unions oppose gay marriage? Certain religious groups want to deny gays the sacredeness of what they take to be a sacrament. But marriage is no sacrament. Some of my fellow Catholics even think that “true marriage” was instituted by Christ. It wasn’t. Marriage is prescribed in Eden by YHWH (Yahweh) at Genesis 2.24: man and wife shall “become one flesh.” When Jesus is asked about marriage, he simply quotes that passage from Genesis (Mark 10.8). He nowhere claims to be laying a new foundation for a “Christian marriage” to replace the Yahwist institution.

The early church had no specific rite for marriage. This was left up to the secular authorities of the Roman Empire, since marriage is a legal concern for the legitimacy of heirs. When the Empire became Christian under Constantine, Christian emperors continued the imperial control of marriage, as the Code of Justinian makes clear. When the Empire faltered in the West, church courts took up the role of legal adjudicator of valid marriages. But there was still no special religious meaning to the institution. As the best scholar of sacramental history, Joseph Martos, puts it: “Before the eleventh century there was no such thing as a Christian wedding ceremony in the Latin church, and throughout the Middle Ages there was no single church ritual for solemnizing marriage between Christians.”


Only in the twelfth century was a claim made for some supernatural favor (grace) bestowed on marriage as a sacrament. By the next century marriage had been added to the biblically sacred number of seven sacraments.  .   .   .   .   And bad effects followed. This sacralizing of the natural reality led to a demoting of Yahwist marriage, the only kind Jesus recognized, as inferior to “true marriage” in a church.
Those who do not want to let gay partners have the sacredness of sacramental marriage are relying on a Scholastic fiction of the thirteenth century to play with people’s lives, as the church has done ever since the time of Aquinas. The myth of the sacrament should not let people deprive gays of the right to natural marriage, whether blessed by Yahweh or not. They surely do not need—since no one does—the blessing of Saint Thomas.

Also of interest is a November 11, 1915 newspaper article set out below that looks at the "evolution of marriage" via Good As You. What noteworthy is that part of the evolution is the trend from polygamous marriage - the standard in the Old Testament - and the movement from women being the property of their husbands toward equal partners.  Not surprisingly, the author, Cyrus Towsend Brady, an ordained Episcopal priest who died in 1920 was none too happy with the "evolution of marriage."  The bottom line is that marriage was never "created by God" and has always been about property rights and control of women.  Not that the truth matters to the Christianists or their GOP minions. 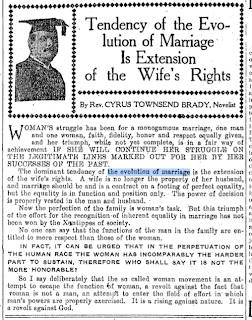