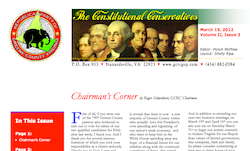 Just as North Carolina exhibited huge differences in support for Amendment One based on education levels (and I would suggest intelligence levels too), so too is the case in Virginia.  Hence, the Greene County Republican Party newsletter suggesting that an "armed revolution" is called for if Barack Obama is re-elected.  For those unfamiliar with Virginia, Greene County is just north of Charlottesville and Albemarle County but is light years away culturally and socially.  The latter are among the most progressive jurisdictions in Virginia.  In contrast, Greene county is a county predominated by Neanderthal kuckle draggers where not that many years ago when I was at UVA one would see Greene wedding announcements in the Charlottesville newspaper where cousins were marrying cousins.  Not surprisingly, the Republican Party is popular in Greene County.  Think Progress looks at this insane batshitery.  Here are highlights:

The Republican Party of Greene County in Virginia published their monthly newsletter in March and in it, the editor suggested an “armed revolution” will be necessary if President Obama is reelected in November:


We have before us a challenge to remove an ideologue unlike anything world history has ever witnessed or recognized. . . . The ultimate task for the people is to remain vigilant and aware ~ that the government, their government is out of control, and this moment, this opportunity, must not be forsaken, must not escape us, for we shall not have any coarse[sic] but armed revolution should we fail with the power of the vote in November.


The editor of the newsletter, listed as Ponch McPhee, is the latest Virginian to threaten violence towards the president or his administration. Just this week, Christopher Hecker was charged with a felony for threatening to kill the president and other officials, as well as bomb landmarks along the east coast.

The Secret Service, which is tasked with investigating all threats made against the president, wasn’t immediately available for comment on whether they have — or will — conduct a similar investigation into McPhee or the county committee.