There's more new evidence that in its quest to prostitute itself to the Christofascist elements of the GOP base by waging war on LGBT Americans and blocking full LGBT legal equality, the Republican Party is committing political suicide over the long term.  Making the message more dire is the fact that the messenger is a top GOP pollster who worked for Chimperator Bush. Andrew Sullivan has details.  Here are highlights:

Below is a remarkable document. It's a memo circulated by Jan van Lohuizen, a highly respected Republican pollster, (he polled for George W. Bush in 2004), to various leading Republican operatives, candidates and insiders. It's on the fast-shifting poll data on marriage equality and gay rights in general, and how that should affect Republican policy and language. And the pollster's conclusion is clear: if the GOP keeps up its current rhetoric and positions on gays and lesbians, it is in danger of marginalizing itself to irrelevance or worse.

[T]he Republican pollster who arguably knows more about the politics of the gay issue than anyone else (how else to explain the Ohio campaign of 2004?) is advising them in no uncertain terms that they need to evolve and fast, if they're not going to damage their brand for an entire generation: 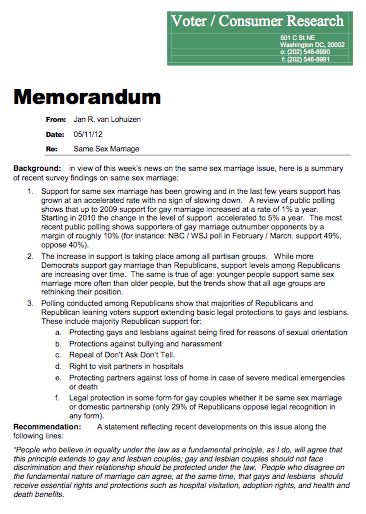 I know that some readers likely think me a broken record on the need for the GOP to kick the Christianists to the curb, but merely looking at my own extended family and the near unanimous exodus from the GOP tells me that my instincts are correct.  Five or six decades of continuous GOP affiliation killed because of the pact the GOP leadership made with the Devil - i.e., the Christofascists.  Given Andrew Sullivan's past arguments that same sex marriage is a conservative approach, he notes as follows:

It's advising Republican candidates to emphasize the conservative nature of gay marriage, to say how it encourages personal responsibility, commitment, stability and family values. It uses Dick Cheney's formula (which was for a couple of years, the motto of this blog) that "freedom means freedom for everyone." And it uses David Cameron's argument that you can be for gay marriage because you are a conservative.

One can only image the flying spittle that this memo will unleash in the corridors of Family Research Council, NOM, the American Family Association, and similar hate groups.   Get out your foul weather gear!
Posted by Michael-in-Norfolk at Friday, May 11, 2012

There is no doubt that the time is coming when moderate Christian Republicans like myself and moderate independent voters will NOT vote for radical Republicans too much under the influence of Radical Right Wing Christians, those you call Christianists.

Even this year, if the Democrats were running someone more like Bill Clinton than Obama, I'd vote for Clinton. I'd probably even vote for Hillary if she ran.

As it is this year, I will vote for the one who scares me less of the two and that one is Mitt Romney. I simply do not believe the country can withstand another four years of Obama's inadequate performance.

I give him F's in everything else. It looks like it is building into a close race. Were the Democrats running a more moderate candidate, I don't think there would be a race at all. I think the moderate Democrat would win hands down.