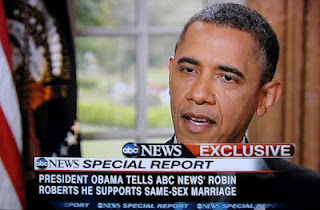 As regular readers of this blog know, I have often been frustrated and/or angry with Barack Obama and his repeated willingness to throw LGBT Americans under the bus when deemed politically expedient.  Yes, at times Obama has exhibited pro-gay actions: passage of DADT repeal (under extreme pressure), cessation of defense of DOMA, and various administrative actions.  Today, much to my surprise, Obama finally got off the fence on same sex marriage.  Am I pleased that he finally did so?  Most definitely, even though it's unclear what Obama's personal support for same sex couples will mean from a practical perspective.   I do hope that Obama's statements will perhaps help LGBT youth to believe that the future can be better.  From surfing the blogosphere, I'm not the only one with mixed emotions and uncertain as to what the consequences will be.   First, these reactions from Andrew Sullivan:

I was uncharacteristically at a loss for words for a while, didn't know what to write, and, like many Dish readers, there are tears in my eyes.

So let me simply say: I think of all the gay kids out there who now know they have their president on their side. I think of Maurice Sendak, who just died, whose decades-long relationship was never given the respect it deserved. I think of the centuries and decades in which gay people found it impossible to believe that marriage and inclusion in their own families was possible for them, so crushed were they by the weight of social and religious pressure. I think of all those in the plague years shut out of hospital rooms, thrown out of apartments, written out of wills, treated like human garbage because they loved another human being. I think of Frank Kameny. I think of the gay parents who now feel their president is behind their sacrifices and their love for their children.

Today Obama did more than make a logical step. He let go of fear. He is clearly prepared to let the political chips fall as they may. That's why we elected him. That's the change we believed in. The contrast with a candidate who wants to abolish all rights for gay couples by amending the federal constitution, and who has donated to organizations that seek to "cure" gays, who bowed to pressure from bigots who demanded the head of a spokesman on foreign policy solely because he was gay: how much starker can it get?


Then there are the thoughts of my blogger friend Pam Spaulding who I first met at the 2008 LGBT Blogger Summit in Washington, D.C., and with whom I often find myself in agreement:

The President’s position to date has been dodge and parry that ultimately made no sense politically. Robin Roberts in her live report moments ago, cited that President Obama’s “evolution” finally occurred because of a conversation with his daughters, who attend school with kids who have same-sex parents, and that it wasn’t a big deal.

Well, I guess that’s as good a cover story for the debutante debut on this matter as any. After all, Mitt Romney has staked out a position in favor of a federal marriage amendment, something that will go nowhere. It all comes down to whether either of them think this is a decision point for voters who are out of work, have lost their home or health insurance.

Even as one part of me celebrates the end of the torture, as I said earlier, it smarts sitting here in NC where his evolution is cold comfort for those of us now living under the thumb of a marriage discrimination amendment.

Being jerked around, constantly seen as an ATM, and the man can’t even state the obvious, and his surrogates continue this tap dance of stupidity over what is or isn’t an affirmation that the President believes in full equality for gay and lesbian couples. His own campaign couldn’t even lift a digital finger to tell people to vote against discrimination here in NC. The President can’t even sign an executive order barring employment discrimination against LGBTs in federal contracts.

Being able to come out of the closet and not be fired is eons more important sitting here in NC than the right to marry, but I’m sure that POV and emotional drain of this won’t carry the day among most of my fellow LGBTs celebrating the President’s statement.

The equality movement will celebrate — as it should — and move on; it will be easy to forget how hard we fought without the President’s help here. The expect the outflow of gay $$$ to his campaign will now accelerate. We’re left to pick up the pieces until the feds/courts help us here in North Carolina.
All this is to say, we’re not just a political football. Families are going to be hurt here.

As in North Carolina, LGBT Virginians can be fired at will and we have ZERO legal protections.  While support of gay marriage is nice, employment non-discrimination protections would be more practical for many of us.  Having been forced from a large law firm after I came out, employment is a huge deal for me.

Today Barack Obama announced that he supports the freedom to marry. Personally. Because he knows monogamous same-sex couples who are raising children. (Non-monogamous couples aren't allowed to get legally married, of course, unless they're straight.) But the president also supports the "concept" of states "deciding the issue on their own." (States like, say, North Carolina, which yesterday banned any recognition of same-sex relationships in reality, not in concept.) So the president supports same-sex marriage while also supporting the right of states to ban the same-sex marriages that he supports. Which means, of course, that once the dust settles... everyone is going to be upset, supporters of marriage equality and opponents alike.


And yes, I must confess I contributed to the Obama campaign after hearing the news.  I'm still not thrilled with Obama, but now the contrast between Obama and Romney - as noted by Andrew - makes it a no brainer as to I will support in November.  Despite his waffling, Obama finally seems to recognize my humanity.  Romney does not.  It's that simple.
Posted by Michael-in-Norfolk at Wednesday, May 09, 2012