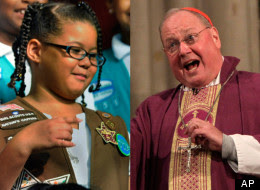 The vicious ugliness of the Roman Catholic bishops when it comes to pushing a relentless anti-gay jihad seems to know few limits.  The latest target of the child rapist protecting monsters is the Girl Scouts of the USA.  The Girl Scouts it seems are not sufficiently homophobic and vicious towards LGBT individuals to satisfy the bishops' agenda of hate and bigotry.  It's probably no coincidence that a female related organization is in the bishops bulls eye since these bitter men in dresses cannot stand uppity females.  Just ask the American nuns.  Leading the charge is one of the minions of disgusting porcine Timothy Dolan, Archbishop of New York.  As is always the case, dealing with the moral filth within the priesthood and Church hierarchy that protected and enabled sexual predator priest isn't on the bishops' radar screen.  A piece in Huffington Post looks at the Catholic Bishops attack on the Girl Scouts.  Here are excerpts:

Long a lightning rod for conservative criticism, the Girl Scouts of the USA are now facing their highest-level challenge yet: An official inquiry by the U.S. Conference of Catholic Bishops.

At issue are concerns about program materials that some Catholics find offensive, as well as assertions that the Scouts associate with other groups espousing stances that conflict with church teaching. The Scouts, who have numerous parish-sponsored troops, deny many of the claims and defend their alliances.

The inquiry coincides with the Scouts' 100th anniversary celebrations and follows a chain of other controversies.

Earlier this year, legislators in Indiana and Alaska publicly called the Scouts into question, and the organization was berated in a series aired by a Catholic broadcast network. Last year, the Scouts angered some conservatives by accepting into a Colorado troop a 7-year-old transgender child who was born a boy but was being raised as a girl.

Some of the concerns raised by Catholic critics are recycled complaints that have been denied by the Girl Scouts' head office repeatedly and categorically. It says it has no partnership with Planned Parenthood, and does not take positions on sexuality, birth control and abortion.

The new inquiry will be conducted by the bishops' Committee on Laity, Marriage, Family Life and Youth. It will look into the Scouts' "possible problematic relationships with other organizations" and various "problematic" program materials, according to a letter sent by the committee chairman, Bishop Kevin Rhoades of Fort Wayne, Ind., to his fellow bishops.

[T]here's frustration within the iconic youth organization – known for its inclusiveness and cookie sales – that it has become such an ideological target, with the girls sometimes caught in the political crossfire.
"I know we're a big part of the culture wars," said the Girl Scouts' spokeswoman, Michelle Tompkins. People use our good name to advance their own agenda."

One of the long-running concerns is the Girl Scouts' membership in the 145-nation World Association of Girl Guides and Girl Scouts.  The association, known as WAGGGS, is on record as saying girls and young women "need an environment where they can freely and openly discuss issues of sex and sexuality." It also has called for increased access to condoms to protect against sexually transmitted diseases.  Some critics want the Girl Scouts of the USA to pull out of the world group; the scouts aren't budging.

The Girl Scouts have been entangled in the culture wars as far back as the 1970s, when some conservatives became irked by the prominence of feminists such as Betty Friedan in the organization's leadership.  In 1993, Christian conservatives were outraged when the Girl Scouts formalized a policy allowing girls to substitute another word for "God" – such as Allah or Buddha – in the Girl Scout promise that reads: "On my honor, I will try to serve God and my country."

Girl Scout controversies surfaced recently in two state legislatures.  In Indiana, Rep. Bob Morris wrote to his colleagues depicting the Girl Scouts as a radical group that promotes abortions and homosexuality. He later apologized for "reactionary and inflammatory" comments, but stood by his contention that the Scouts have links with Planned Parenthood.

In Alaska, Rep. Wes Keller – before deciding whether to support a resolution honoring the Girl Scouts – said he needed to investigate information "floating around the Internet" about the alleged Planned Parenthood link. Keller later said he was convinced the rumors were baseless; the resolution passed unanimously.