The GOP and Austerity - A Bridge to Nowhere 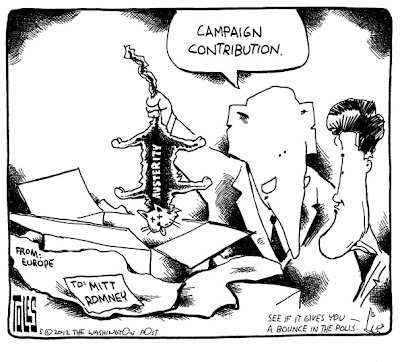 I will be the first to concede that government spending needs to be reined in.  However, the Republican idea of austerity is slashing social programs, adding even more money to defense, and giving huge tax cuts to the already very wealthy.  Why is it only the poor and average Americans are supposed to live with austerity while the favored targets of GOP largess party on?  Oh, we know part of the answer: austerity and slashes in government spending ill impede economic recovery and make Barack Obama more vulnerable in November, but beyond that the Republicans don't seem to give a damn for the harm done to the rest of the population.  And the Kool-Aid drinking crowd are too stupid to figure out that they are getting screwed by the GOP as long as pet enemies like Planned Parenthood are denied funding.  Indeed, I increasingly believe that to be a member of the GOP nowadays one must be either (i) consumed with greed and disdainful of the less fortunate or (ii) have had a lobotomy.    With the rejection of austerity in France - where it has harmed the economy - the issue is whether Americans will wake up to the GOP's disingenuous ploy.  Columns in the New york Times and Washington Post look at the rejection of austerity.  First these highlights from the Times:

The French are revolting. The Greeks, too. And it’s about time. Both countries held elections Sunday that were in effect referendums on the current European economic strategy, and in both countries voters turned two thumbs down. It’s far from clear how soon the votes will lead to changes in actual policy, but time is clearly running out for the strategy of recovery through austerity — and that’s a good thing.  Needless to say, that’s not what you heard from the usual suspects in the run-up to the elections.
[C]laims that slashing government spending would somehow encourage consumers and businesses to spend more have been overwhelmingly refuted by the experience of the past two years. So spending cuts in a depressed economy just make the depression deeper. Moreover, there seems to be little if any gain in return for the pain.
Germany’s experience isn’t, as the Germans imagine, an argument for unilateral austerity in Southern Europe; it’s an argument for much more expansionary policies elsewhere, and in particular for the European Central Bank to drop its obsession with inflation and focus on growth.
The Germans, needless to say, don’t like this conclusion, nor does the leadership of the central bank. They will cling to their fantasies of prosperity through pain, and will insist that continuing with their failed strategy is the only responsible thing to do. But it seems that they will no longer have unquestioning support from the Élysée Palace. And that, believe it or not, means that both the euro and the European project now have a better chance of surviving than they did a few days ago.

Will Americans learn from what's happened in Europe?  Probably not give America's delusion that it can do what others could not - a delusion that Afghanistan should have killed, but hasn't - at least not among the military leadership and many conservatives who still blather about American exceptionalism and similar fantasies.  Here are highlights from the Washington Post piece:

Economic austerity is a dangerous, self-defeating intellectual fad. Perhaps I should say that’s what it was, given Sunday’s election results in Europe. Perhaps I should also say good riddance. Voters in France, Greece and even Germany — a hotbed of the austerity cult — told their political leaders, in no uncertain terms, that boosting economic growth is more important than cutting government spending. Here in the United States, I hope that Democrats, at least, were paying attention; I fear that the addled ideologues who control the Republican Party will never get the message.

Sarkozy and German Chancellor Angela Merkel agreed on a common policy of budget cuts and partial “reform” — a euphemism for “dismantling” — of the welfare state. This, they decided, was the way to return Europe to prosperity and save the European Union’s common currency, the euro, from collapse.
But on Sunday, even Merkel got a message from voters: Her party was punished in local elections in the northern German state of Schleswig-Holstein, where it appeared that a center-left, anti-austerity coalition would end up in control.

But another clear lesson is that austerity has to be seen as a means, not an end. The goal is to recover from the massive blow inflicted by the global financial meltdown and return to prosperity. This may involve a measure of austerity — but definitely requires considerable economic growth, which should be policymakers’ first priority.

The reason is simple: If you can get the economy growing again, all other aspects of the crisis become more manageable. Debt and deficits shrink as a percentage of national output. Unemployment declines, as does the need for social spending.

But putting a chokehold on government spending at a time when economies are just sputtering back to life — as the austerity fetishists have tried to do in Europe, and as Republicans solemnly pledge to do in the United States — is monumentally self-defeating.

In Britain, the economy was growing when Prime Minister David Cameron took office two years ago. Adhering to the platform of his Conservative Party, Cameron took the austerity route with a host of gloom-and-doom budget cuts. Now unemployment is rising and the economy has slipped back into recession. Nice job, Tories.
Mitt Romney and the GOP subscribe to the pro-austerity view. They are, of course, entitled to their opinion, even if it happens to be wrong. I sincerely wish them all the electoral success their ideological allies are having across the Atlantic.