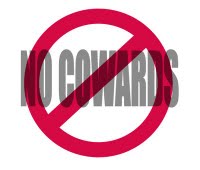 While I can understand Barack Obama's reluctance - might cowardice be a better term? - on endorsing same sex marriage rights, the reality is that those who would be offended by such a move to a point that they'd vote Republican aren't going to vote for Obama or any Democrat anyways.  These anti-gay zealots are the Kool-Aid drinkers and Christianist members of the GOP base.  Even a significant majority of the Catholic laity (as opposed to the child rapist protecting bishops) support legal recognition of same sex relationships.  The editors at Bloomberg.com get this reality even if Obama does not.  In an opinion piece today, they took Obama to task for his cowardice on same sex marriage and suggested that he needs to get on board with Joe Biden.  In the process, they also get in a slap at Mitt Romney.  Here are highlights:

Others do, most notably his boss, President Barack Obama. The president, surveying an election landscape in which victory may require threading a few political needles, has been disappointingly reticent on the issue -- even as Education Secretary Arne Duncan on Monday joined the chorus endorsing gay marriage.

The discomfort the president has professed to feel about gay marriage -- at least since entering national politics; he seemed remarkably more at ease in the 1990s -- has always seemed more political than personal.
We hope that the president’s reluctance to engage on gay marriage is a similar matter of strategy. But as he surely knows, at some point moral questions break the bounds of calculation and come down to something more elemental: courage and commitment.  These qualities were notably absent last week with the departure of foreign policy spokesman Richard Grenell from Mitt Romney’s campaign.

This battle will ultimately end, and anyone with a passing familiarity with the American story knows how. We have entered the final stage, where opponents theatrically vow to maintain segregation, or its marital approximation, now and forever.

Marriage, like every successful social institution, changes with the times. When President Obama was born, interracial marriage was prohibited in much of the nation, and public support for it registered in the low single digits. Today, in roughly one-quarter of American marriages, wives earn more than their husbands, some of whom stay home to care for children. Such arrangements -- including the 10 percent of marriages that are interracial -- are no more “traditional” than gay marriages. So what?

The advance of gay rights has been driven largely by culture, with each decade bringing new levels of empowerment. As the latest ballot measure in North Carolina suggests, the political arena has generally been a lagging indicator. President Obama can help change that dynamic by putting his moral authority squarely behind the right to marry.

Congress has to repeal DOMA. Obama would sign that. What he can do his administration has done: opine that it is unconstitutional and not defend it in court. Especially in an election year, there is NO reason for Obama to do anything more and it is a waste of breath/e-ink to moan about it. Focus on Congress!!!