Feel the Love: North Carolina Pastor Wants Gays Prosecuted As in the Past 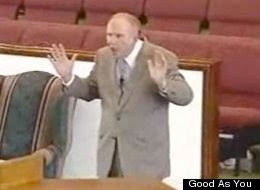 The hate and venom coming out of North Carolina make one thing very clear: Amendment One has NOTHING to do with "protecting marriage" and everything to do with punishing gays for not subscribing to Christianist religious beliefs.  Indeed, rather than simply deny us legal recognition of our relationships, the pro-Amendment One crowd wants us to be criminally prosecuted.  The only thing left unsaid is whether capital punishment is their preferred punishment.  In an explosion of spittle spraying verbal diarrhea over the weekend Ron Baity, founding pastor of Winston-Salem's Berean Baptist Church (another pastor at this church advised parents to beat the gay out of the boys) and head of the anti-marriage equality organization Return America, made the Christianist agenda painfully clear to anyone with their eyes and ears open.  Baity makes it clear what a vote in favor of Amendment One truly signifies.  Here are highlights from Huffington Post:

A prominent North Carolina pastor has joined the chorus of voices speaking out in favor of Amendment One, which would define marriage as being between a man and a woman in the state's constitution.  Ron Baity . . .
referred to homosexuality as "a perverted lifestyle" in a Sunday sermon before telling his congregation that lesbian, gay, bisexual and transgender (LGBT) people should be prosecuted, Good as You is reporting.

"For 300 years, we had laws that would prosecute that lifestyle," he is quoted as saying. "We've gone down the wrong path. We've become so dumb that we have accepted a lie for the truth, and we've...discarded the truth on the shoals of shipwreck!"

As Jeremy Hooper at Good As You also notes, Baity also is preaching that marriage equality supporters are not only bringing on God's condemnation, but also man-on-child and man-on-horse marriage.  Sadly, in our current society, conservative white Christians seem best recognized by their hatred towards others: gays, blacks, Hispanics, immigrants, non-Christians.  Indeed, toward almost everyone.
Posted by Michael-in-Norfolk at Tuesday, May 08, 2012

These people may call themselves Christians, but they aren't. They are just haters. They have come to see themselves has the chosen of God and everyone else as unworthy.

It's a shame that in their zeal to spread their message of hate, they turn people away from the God of the gospel.

I can only make my usual appeal to your readers to remember that there are Christians who are unlike these.