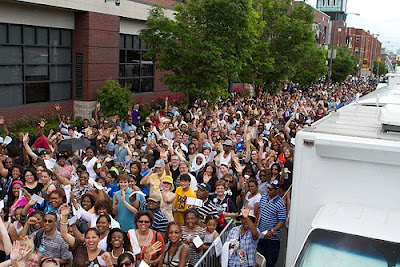 Even as the Virginia GOP tries to move Virginia backwards to a pre-Civil War society, Virginia's cities are slowly growing in population to a point where they are on the cusp of being able to out vote the backward rural bastions of the GOP.  Yes, there are still many Kool-Aid drinking knuckle draggers in Virginia Beach and Chesapeake (the latter in particular), but over all the urban vote seems to want to move forward into the 21st century rather than return to the 19th century.  Moreover, the urban populations reflect the racial diversity that is the new America - much to the horror of the white supremacist friendly Virginia GOP.  Thus, it's no surprise that Barack Obama kicked off his campaign in Virginia in Richmond, the former capital of the Confederacy, which in many ways is evolving into a progressive city (at least by Virginia standards).  The photo above shows some of the large crowd that turned out at Virginia Commonwealth University.  Blue Virginia notes the sharp contrast in the crowd against the GOP base:

Notice a few things about the crowd that Willard will never match? 1) Enthusiasm (why would anyone in their right mind be enthused about a corporate robot?); 2) numbers (Remember when Willard had a rally in a football stadium, and it was 99% empty? Guarantee - that will NOT happen to Barack Obama today, or any day in this campaign!); 3) a crowd that looks like America, in all its diversity (Willard's crowd - older and white, pretty much. Not that there's anything at all wrong with older white people - there are good and bad people in every race, religion, ethnicity, etc. - but crowds that are consistently made up of 95% older white people, as are invariably seen at Republican rallies, is NOT representative of the demographics of today's America. Sorry Willard.)