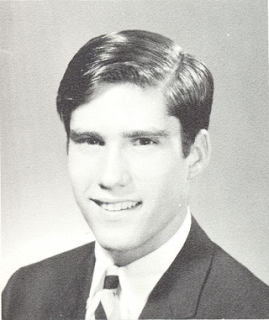 The Washington Post is unleashing an unwanted headache for Mitt Romney with it's coverage of Romney's nasty gay bashing - "pranks" as he calls - them in high school. The story hit the online version of the Post today and will be the front page story in tomorrow morning. For many of us in the LGBT community, these stories bring back a great deal of hurt an misery as we recall the bullying we withstood - and in the case of some, such as myself, actual physical violence. Romney's actions years ago might be forgivable if he genuinely apologized fore the hurt he caused others. But his apologies have been half ass at best and involved laughing in the audio tapes that I have heard. The impression one is left with is that once an insensitive bully, always a bully. Bob Felton at Civil Commotion was rather kind when he described Romney this way"|:

It all bespeaks what looks like a lifelong inability to actually see other people — a privileged snot who is not really aware of others and, insofar as he is, regards them as obstacles to somehow be bent to his will or pushed aside.

Sadly, Romney seems to be still unaware of others and that they are real, living, breathing, feeling humans with hopes, dreams and the ability to feel pain and anguish. Sadly, Romney is typical of the wealthy and the Christianists who seem incapable of viewing those different than themselves as fully human and worthy of the same civil rights and respect that they themselves demand.  Here are some highlights from the Washington Post's bombshell story:

BLOOMFIELD HILLS, Mich. — Mitt Romney returned from a three-week spring break in 1965 to resume his studies as a high school senior at the prestigious Cranbrook School. Back on the handsome campus, studded with Tudor brick buildings and manicured fields, he spotted something he thought did not belong at a school where the boys wore ties and carried briefcases. John Lauber, a soft-spoken new student one year behind Romney, was perpetually teased for his nonconformity and presumed homosexuality. Now he was walking around the all-boys school with bleached-blond hair that draped over one eye, and Romney wasn’t having it.

“He can’t look like that. That’s wrong. Just look at him!” an incensed Romney told Matthew Friedemann, his close friend in the Stevens Hall dorm, according to Friedemann’s recollection. Mitt, the teenage son of Michigan Gov. George Romney, kept complaining about Lauber’s look, Friedemann recalled.

A few days later, Friedemann entered Stevens Hall off the school’s collegiate quad to find Romney marching out of his own room ahead of a prep school posse shouting about their plan to cut Lauber’s hair. Friedemann followed them to a nearby room where they came upon Lauber, tackled him and pinned him to the ground. As Lauber, his eyes filling with tears, screamed for help, Romney repeatedly clipped his hair with a pair of scissors.

The incident was recalled similarly by five students, who gave their accounts independently of one another. Four of them — Friedemann, now a dentist; Phillip Maxwell, a lawyer; Thomas Buford, a retired prosecutor; and David Seed, a retired principal — spoke on the record. Another former student who witnessed the incident asked not to be identified.
The incident transpired in a flash, and Friedemann said Romney then led his cheering schoolmates back to his bay-windowed room in Stevens Hall.

ABC News has a story that recounts the incident as related by one of Romney's fellow students.  Here are excerpts:

A high school classmate of presidential candidate Mitt Romney told ABC News today that he considers a particular prank the two pulled at Michigan’s Cranbrook School to be “assault and battery” and that he witnessed Romney hold the scissors to cut the hair of a student who was being physically pinned to the ground by several others.

“It’s a haunting memory. I think it was for everybody that spoke up about it… because when you see somebody who is simply different taken down that way and is terrified and you see that look in their eye you never forget it. And that was what we all walked away with,” said Phillip Maxwell, who is now an attorney and still considers Romney an old friend.

“I saw it with my own eyes,” said Maxwell, of the anecdote first reported by the Washington Post. Maxwell said Romney held the scissors helping to cut the hair of a student, John Lauber, who was presumed to be gay and who had long hair. “It was a hack job… clumps of hair taken off.”

Andrew Sullivan has these thoughts on Romney's despicable character flaws:

Romney has now apologized. He claims he didn't know the classmate was gay:

I certainly don’t believe that I thought the fellow was homosexual,” Romney told Kilmeade. “That was the furthest thing from our minds back in the 1960s.”

But I thought he had no memory of this incident? That was his position this morning. And there was no homophobia in the 1960s? Seriously: Etch-A-Sketch.   .   .   .   .   I conclude two things: Romney was a high school bully of gay or effeminate kids and is also a brazen liar.

I was in high school in the 1960's and believe me, we all knew about "fags," "faggots," "homos" and a host of other derogatory terms.  I certainly heard them often enough.   Romney's statements of ignorance on the terminology and the anti-gay bullying that was rampant in the 1960's are total lies.  But then again, those who profess their religiosity and who incessantly kiss the bigoted asses of the Christofascists are the biggest liars of all.
,
Posted by Michael-in-Norfolk at Thursday, May 10, 2012