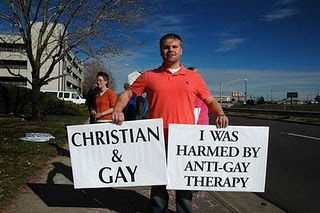 As regular readers know, I view few things as being more fraudulent and harmful than "ex-gay" therapy a/k/a reparative therapy.  It doesn't work - as even the head of Exodus International has more or less admitted - and causes emotional and psychological harm for gays who are striving to change something unchangeable. The truth, of course, means nothing to the "godly Christian" crowd who view "ex-gay ministries" as (i) cash cows (some programs charge thousands of dollars for the worthless "therapy") and, more importantly (ii) useful political tools to further the myth that gays change "change" and, therefore deserve absolutely no legal anti-discrimination protections, not to mention same sex marriage rights.   California is the first state poised to potentially ban "ex-gay" therapy for those under the age of 18 and require older patients - victims is a better term - to be provided with disclaimers that basically advise them that the "ex-gay" therapies do not work.  Needless to say, the Christofascists are having conniption fits and the spittle is flying by the bucket full.  The Advocate has a piece that looks at the full bore hysteria gripping the "ex-gay" proponents as they seek to thwart a law that would largely shut them down in the nation's most populous state and perhaps trigger similar laws in other states.  Here are excerpts:

Now that California's Senate bill 1172 has passed the judiciary committee, it now goes to vote in front of the full Senate. The bill, introduced by Sen. Ted W. Lieu, would be first in nation to regulate so-called conversion therapy. Lieu called the bill a "patient-protection plan," wrote on his own website, that the bill will "help raise public awareness of bogus and unethical therapies by mental-health providers who promise to help change a person’s sexual orientation."

The bill will ban children under 18 from being subjected to ex-gay, conversion, or reparitive therapy treatments and would require adults who seek those treatments to sign a consent form indicating that they understand that the therapy has no proven medical basis and that there are potential dangers of reparitive therapy (including raised risk of suicide and depression).

“Under the guise of a California license, some therapists are taking advantage of vulnerable people by pushing dangerous sexual orientation-change efforts,” said Lieu. “These bogus efforts have led in some cases to patients later committing suicide, as well as severe mental and physical anguish. This is junk science and it must stop. Being lesbian or gay is not a disease or mental disorder for the same reason that being a heterosexual is not a disease or a mental disorder. The medical community is unanimous in stating that homosexuality is not a medical condition.”

Anti-gay religious leaders including NARTH and Family Research Council have come out full force urging state legislators to vote against the bill when the Senate takes it to vote.

I know those who have undergone "ex-gay" therapy and there is no doubt in my mind that it seriously f*cked them up.  One has become an alcoholic over is inability to "change," another suffers from serious emotional issues, and I  know of at least one young man who committed suicide.  In my book, anyone advocating "ex-gay" therapy is an outright liar and, if they claim to be "ex-gay" themselves, they are seriously delusional and/or "ex-gay for pay" since most ex-gays strike me as being losers who have stumbled upon an easy way to make a buck and care nothing about the damage they do to others.
Posted by Michael-in-Norfolk at Saturday, May 12, 2012