Is The GOP’s Facing An Impending Electoral College Meltdown 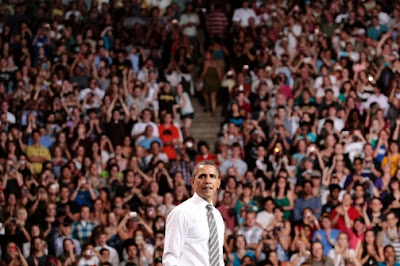 Six months out from the November elections leaves plenty of time for any number of things to happen and turn current thinking on its head.  But as a piece in The Daily Beast suggests, the Electoral College map does NOT look good for the GOP and Mitt "Etch A Sketch" Romney.  For the record, I have no great love for Barack Obama who I see as a cynical politician, especially when it comes to LGBT issues.  He leaves you with near whip lash at times as he plays politics with LGBT lives.  That said, given Mitt Romney's slavish obedience to the Christofascist elements in the GOP base, I can only conclude that Obama is the lesser of the two evils.  God help the country if Romney's elected and he takes his policy points from hate merchants like the folks at hate groups like the American Family Association and Family Research Council.  Fortunately, the GOP's agenda of denigrating and alienating everyone but older white voters and Christianists may prove to be the best bulwark against a Romney victory.  Here are some article excerpts:

It’s now officially not too early to start thinking about the Electoral College map. First of all, the election is just six months away, which provides pundits one of those symbolic but meaningless pivot points to a new phase. But more than that, certain patterns are just starting to emerge.  .   .   .   So what do we know right now? Chiefly, this great and very amusing irony: that the Electoral College, that bane of good-government liberals for decades (and especially since the 2000 fiasco), is Obama’s best friend. He has the hate-and-anger party to thank for that. But the implications for the fall campaign may be ominous.

[N]ationally, it’s a close race.  But when you look at the likely swing states, it is not right now a close race at all. RCP’s Electoral College map gives Obama 227 electoral votes from states that are solidly or pretty clearly leaning in his direction. It gives Romney just 170. It lists 11 toss-up states: Arizona, Colorado, Florida, Iowa, Missouri, Nevada, New Hampshire, North Carolina, Ohio, Pennsylvania, and Virginia. You can then click on all the recent polls in those states. So I did. Here’s what I found.

Obama leads in nine of the 11 states. Romney leads only in two, and he leads in the two whose mere presence on a list of swing states suggests trouble for him—Arizona and Missouri. Romney’s lead in those states is small (3.2 percent in the former, 3.0 in the latter). Of the nine states in which Obama leads, he is ahead by outside your typical three- or four-point margin of error in four: Colorado (9.5 percent), Nevada (6.7 percent), Pennsylvania (6 percent), and Ohio (5.3 percent). Obviously it would be premature to say that Obama is certain to win those states. But given these leads, let’s just give him those states’ 53 combined electoral votes for the sake of argument.

As you’ve already figured out, 227 plus 53 equals 280, which means Obama wins (270 needed). Now here’s what’s really interesting about this hypothetical. Look at the list of states Obama does not need to win under this scenario: Florida, Iowa, North Carolina, and Virginia. That’s 63 electoral votes he can give away, from three states (all of them but Iowa) that political journalists are always insisting are crucial to Obama’s hopes.

So, two questions: first, how did the electoral map come to favor Democrats? And second, what are the implications for the kind of race we’re going to see?

On the first question, we know all about the demographic changes of recent years, identified most comprehensively by Ruy Teixeira and John Judis. But there’s more to the story than that. Demography didn’t have to be destiny. If the Republican Party of the last few years hadn’t done everything it could possibly imagine do to alienate Latinos, “new-economy” professionals, and young people, the party would have remained competitive  .  .  .  .  But the Republicans chose not to be that party. They decided to be the hate-and-anger party, and they veritably shoved states like those I just mentioned into the Democratic column. The GOP message has been: “If you’re gonna let all those funny-talking brown people and wine-sipping brainiacs in your states, then we don’t want you voting for us anyway!”

And as to the kind of campaign we can expect: I’d say the most negative in history. Barring some huge catastrophe, the only way a not-well-liked candidate like Romney can make up five to seven points in expensive-market states is through massive doses of attack ads  .  .  .  .   Hate and anger aren’t going anywhere.

I continual bemoan what has become of the Republican Party.  One can hope that if Romney goes down to a crushing defeat common sense might once again prevail in the GOP.  But that's not likely since the Christofascists and Tea Party crowd will bend over backwards blaming Romney's loss on the fact that he wasn't extreme enough.  It will be interesting to see how it all plays out.
Posted by Michael-in-Norfolk at Sunday, May 06, 2012

I quake in fear about where our country will head if Romney is elected. He has already demonstrated he has no back bone and plays to the tea partiers and the xian taliban.

I'm not sure what its going to take to get the republican party to rotate away from the extreme right. I'm wondering if a third party, a viable third party will appear and we are seeing the beginning of the end of the repubs.