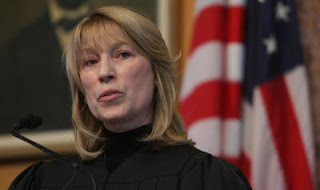 I noted previously how the three Iowa Supreme Court justices who were ultimately removed from office due to the efforts of anti-gay hate groups will be receiving Profile in Courage awards from the John F. Kennedy Library Foundation.  As the image in the preceding post stated, morality is doing what's right no matter what religious bigotry might dictate.  These justices (former Chief Justice Marsha Ternus is pictured at right) demonstrated courage and true morality - something utterly devoid in the ranks of the "godly Christian" set who would not recognize true morality and decency if it beat them in the head with a 2x4.  Frank Bruni has an op-ed in the New York Times that looks at the supreme injustice done under the guise of religion.  Here are highlights:


WE tend to think of people who play pivotal roles in the advancement of social justice — and who pay steep prices for it — as passionate advocates with intense connections to their cause. We imagine them as crusaders.
Marsha Ternus wasn’t. She just tried to be fair.

The first woman ever to preside over the Iowa Supreme Court, she was asked three years ago to rule on a challenge to an Iowa statute banning same-sex marriage. She looked at the case and at the law and deemed the ban a violation of equal-protection language in the state’s Constitution, which said that no privileges should be reserved for a limited class of citizens. Her six fellow justices agreed. Their unanimous decision is why Iowa is among the minority of states in which two men or two women can marry.

It’s also why Ternus lost her job. The following year, she and two other justices came up for what are usually pro forma retention votes, and Iowans booted them from the bench. National groups on the religious right had mounted a furious campaign against them, calling them members of “an arrogant elite” with a “radical political and social agenda.”

“The important thing that happened wasn’t us losing our jobs,” she said over dinner here on Thursday. “It’s what it represents about what people think of justice and the rule of law and constitutional rights.” Ternus, who is 60, agreed to meet with me because on Monday, she, Baker and Streit are receiving Profile in Courage awards from the John F. Kennedy Library Foundation in Boston. The timing, she said, felt right.

Until she encountered so much religious opposition to the court’s decision, some of it from Catholics, she was a loyal member of her local Catholic parish. Two of her three children graduated from Catholic high schools. One went to Notre Dame University.

She said that after the ruling, “when I saw and heard the reaction of people whom it actually impacted, I just couldn’t — I mean — it was amazing to me. I just had never been conscious of how meaningful it was to gay and lesbian couples.”

SHE said that she and the other justices knew there was risk in taking on the same-sex marriage case and began researching it months before hearing arguments. They agonized over the wording of the decision.
Theodore B. Olson, one of the lawyers who has argued the high-profile case against California’s same-sex marriage prohibition, praised the Iowa justices’ ruling for its painstaking thoroughness. “What the Iowa Supreme Court did — and they did a terrific job of this — was to go through the objections systematically,” he told me.

Ternus told me: “If these organizations are really worried about marriage, rather than being motivated by bigotry and hatred, then they would be going after the divorce laws. But they’re not.” What most concerns her, though, is what she sees as the politicization of the judiciary, with elected officials and partisan groups firing warning shots at judges and screening them for preordained allegiances.

The Christofascists' anti-gay agenda has nothing to do with "protecting marriage."  Rather it is all about punishing and stigmatizing LGBT citizens and gaining special - and I would argue, unconstitutional - recognition of their foul religious beliefs in the nations civil laws.  The Christian Right is a clear and present danger to constitutional government.
Posted by Michael-in-Norfolk at Sunday, May 06, 2012